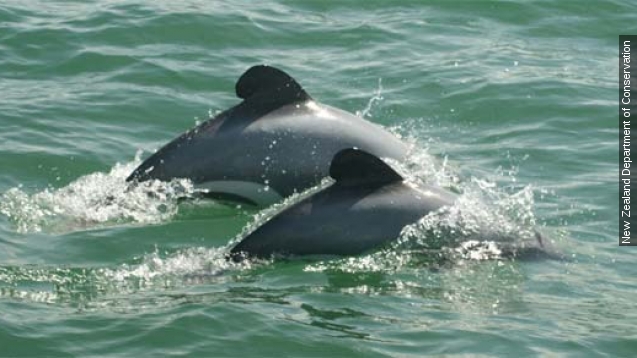 The world's smallest known dolphin is in danger of going extinct. (Video via Green Party Of Aotearoa New Zealand)

Maui's dolphin, a subspecies of Hector's dolphin, is on the brink of extinction, with fewer than 50 left in the wild — all found in New Zealand.

But the New Zealand government is reluctant to act, and has been, even though the dolphin's status has been well-documented for more than a decade, with the population decreasing by more than 90 percent since 1970. (Video via TVNZ)

One of the main threats to the dolphins scientists have singled out is set netting, where walls of net are suspended underwater, which can catch the dolphin and drown them. (Video via Seafood Watch)

Although the government has imposed bans on set netting in some areas, they've shied away from the total ban scientists have called for, partially in response to pressure from commercial fishermen who've spoken against it. (Video via The New Zealand Herald)

"[Ministry of Agriculture and Forestry] and [Department of Conservation] are currently working on a Maui's dolphin recovery plan. I will wait until that plan has been presented before making any decisions on set net bans in Taranaki," Minister for Primary Industries David Carter said.

Since at least 2007, the government's go-to move has been to create panels to create plans to save the dolphin, and then wait until those plans are announced to take action. (Video via New Zealand Parliament)

But that action hasn't gone far enough, according to groups like the International Whaling Commission, which said last summer the measures implemented so far have fallen "significantly" short of what's needed. (Video via International Fund for Animal Welfare)

Despite the new report's claim that if nothing's done the dolphin will go extinct in 15 years, a conservation ministry spokesperson told the BBC the government won't comment on it until after the Whaling Commission issues its own findings in June.