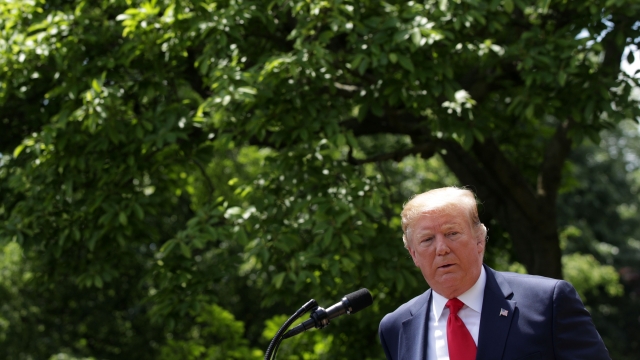 Despite claims that he was a wildly successful businessman, tax records obtained by the New York Times show President Donald Trump lost millions of dollars, year after year.

The New York Times' investigation analyzed a decade's worth of the president's IRS tax transcripts. The outlet doesn't say who provided the IRS data, only that the source had "legal access to it."

According to The Times, the transcripts from 1985 to 1994 show the president's hotels, casinos and other real estate holdings lost money every year. Over those 10 years, the Trump businesses lost $1.17 billion, with about half those losses happening in 1990 and 1991.

President Trump's financial losses were so large that he didn't have to pay income taxes during most of that time. He paid personal income taxes twice — in 1987 and 1988. The Times reports that both of those years he paid based on the alternative minimum tax, which ensures that high earners pay at least a little in taxes.

This batch of tax information is different from what multiple Congressional committees are asking for. Those lawmakers asked Treasury Secretary Steven Mnuchin to turn over the president's more recent returns, but the secretary said no.

The New York Times reached out to the White House for comment more than once. The administration's response focused on the president's desire to update the country's tax system, while a more recent statement said the tax information the paper reported was "demonstrably false."

President Trump responded to the article Wednesday morning on Twitter. He said it was commonplace for real estate developers to have "massive write offs and depreciation" on their taxes. And he called the story "a highly inaccurate Fake News hit job."