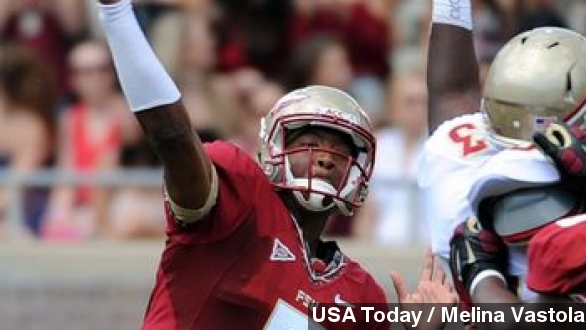 A lengthy and damning report by The New York Times alleges major shortcomings by officials investigating a rape case involving Jameis Winston. Also, according to the report, a second woman sought counseling after an alleged sexual encounter with the Florida State quarterback.

The report mainly focuses on the Tallahassee Police Department and Florida State University's dealings with the case. The report claims both TPD and university officials failed to properly investigate — waiting months to collect evidence, failing to interview key witnesses and more. (Via The New York Times)

The report also indicates another woman, who previous had a sexual encounter with Winston, sought counseling after it. It says: "The woman did not call it rape — she did not say 'no.'  But, the encounter, not previously reported, 'was of such a nature that she felt violated or felt that she needed to seek some type of counseling for her emotions about the experience,' according to Georgia Cappleman, the chief assistant state attorney."

Florida State quarterback Jameis Winston was accused of rape last year, although Florida law enforcement eventually decided not to pursue charges against him despite the wishes of the woman who accused him. (Via ABC)

Different media outlets focused on different parts of the report — Business Insider draws attention to the allegedly botched police investigation, The Florida Times-Union focuses on the blame against both TPD and the university's investigation, while USA Today's The Big Lead highlights the second woman seeking counseling after a sexual encounter.

Still, officials' investigation into the accusations have been heavily criticized even before the article.

Many considered it inappropriate that there was laughter as Florida Prosecutor Willie Meggs announced Winston wouldn't be charged with anything at a press conference last year. (Via Newsy)

The full article is available on The New York Times' website.