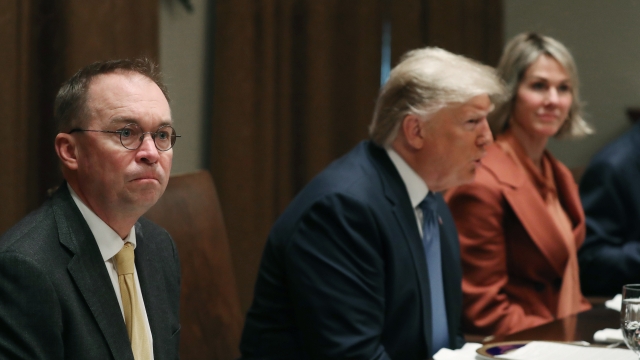 Acting White House Chief of Staff Mick Mulvaney sent an email from Air Force One asking whether the Trump administration could put a freeze on military aid Congress had approved for Ukraine.

That's according to the New York Times, which reports that Mulvaney emailed his senior adviser June 27 while accompanying the president on a flight to Japan. He asked: “Did we ever find out about the money for Ukraine and whether we can hold it back?”

The Times report is adding fuel to Democratic claims that President Trump withheld military aid to pressure Zelenskyy to announce an investigation. According to the report, Blair emailed Mulvaney back, saying he could "expect Congress to become unhinged" if security assistance was delayed as Ukraine faced Russian military aggression.

In an Oct. 17 White House press briefing, Mulvaney acknowledged internal concerns over whether withholding the aid was legal or proper, leading to a question over a potential "quid pro quo."

Mulvaney said: "The Budget Control And Impoundment Act of 1974 says if Congress appropriates money, you have to spend it, at least that's how it's interpreted by some folks. And we knew that that money either had to go out the door by the end of September and we had to have a really good reason not to do it. That was the legality of the issue."

A reporter asked: "To be clear, what you just described is a quid pro quo. It is that funding would not flow unless the investigation into the Democratic server happened as well?" Mulvaney responded: "We do that all the time."

Democratic Senate Minority Leader Chuck Schumer calls the New York Times report a "game changer." He argues that it should compel the Senate to call Mulvaney and other members of Trump's inner circle to testify at the president's impeachment trial. But those efforts face determined resistance from Senate Leader Mitch McConnell and The White House.