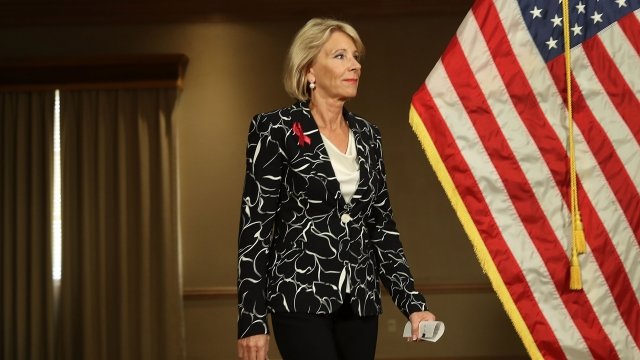 The New York Times obtained a copy of those new policies, which would only hold schools liable for investigating sexual misconduct claims that are formally reported to the proper authorities and took place on campus. Additionally, the government reportedly wouldn't punish institutions that offer "supportive measures" to victims who don't want to file a written complaint, such as counseling, changes in housing and increased security and monitoring.

Under that guidance, schools were required to use the lowest standard of proof called preponderance of the evidence when handling sexual assault charges. That means if more than 50 percent of the evidence points toward guilt, the accused is found responsible.

Interim guidance given to schools in September 2017 allowed them to use either the preponderance standard or the clear and convincing evidence standard; the latter is harder to meet. The Times reports Devos' new proposed rules would make that guidance permanent.

The Department of Education refused to comment on the reported measures, noting that since it's "in the midst of a deliberative process" the Times' report is "premature and speculative."