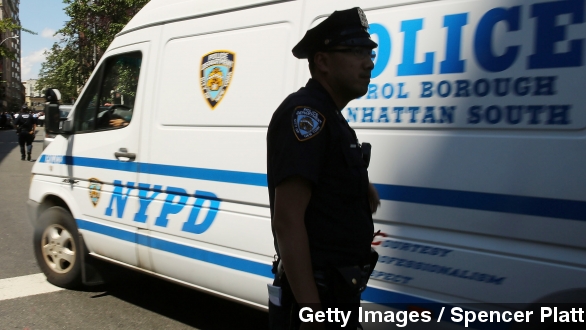 A New York City rookie police officer has fatally shot an unarmed black man in a Brooklyn housing project in what the police are calling a tragic accident, and some observers are calling part of a grim pattern.

"At this point, all indications are that this was an accidental discharge. This discharge, we believe, struck and killed the deceased in this incident," NYPD Commissioner Bill Bratton told reporters.

Twenty-eight-year-old Akai Gurley was shot once in the chest by NYPD Officer Peter Liang during his patrol of a Brooklyn housing complex Thursday night. Police sources told WCBS Liang's gun discharged while he was trying to open a door.

The shooting took place on a darkened stairwell inside the Lewis H. Pink Houses. Gurley's girlfriend, Melissa Butler, who was with Gurley at the time of the shooting, says there was no warning before Liang opened fire. (Video via WPIX)

Butler told a local media outlet, "They didn't present themselves or nothing and shot him. They didn't identify themselves at all. They just shot.​"

Multiple outlets have suggested Liang's inexperience and "nervous" demeanor led to the shooting, along with the poor lighting inside the stairwell.

But others noted this case fits the pattern of police violence against black men, a problem that has dogged the NYPD and other police forces around the country for years.

New York Magazine brought up the case of Timothy Stansbury, a 19-year-old kid who was shot and killed by police in 2004 as he was making his way up a stairwell.

More recent is the case of Eric Garner, who died after being put into a chokehold by an NYPD officer in July. A grand jury is still deciding whether to indict the officer involved. (Video via Time)

And, of course, tensions are still high in Ferguson, Missouri, where a grand jury decision about indicting the officer who fatally shot Michael Brown is expected to be handed down any day now. (Video via KMOV)

In a speech in front of the building where Gurley was killed, Charles Barron of the State Assembly fought back against the police claim that the killing was accidental, calling on Bratton and New York City Mayor Bill de Blasio to offer more than an apology.

The New York Times reports Barron said, "People are outraged, this is happening all over the country, people have no respect for black life. ... I want to hear the justification for this one. We're going to fight for justice with this one just like they are in Ferguson."

Liang has been stripped of his badge and gun and placed on modified assignment. The official investigation into the shooting is still ongoing.