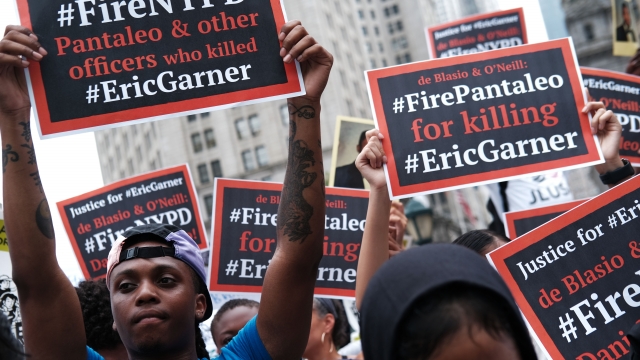 The head of the New York City Police Department has fired the officer involved in Eric Garner's death.

"But none of us can take back our decisions. Most especially when they lead to the death of another human being. ... It is clear that Daniel Pantaleo can no longer effectively serve as a New York City police officer," Police Commissioner James O'Neill said.

The decision comes over five years after Officer Daniel Pantaleo held Garner in a chokehold while trying to arrest him. Garner later died, and the medical examiner said the chokehold contributed to his death.

The NYPD had delayed its disciplinary proceedings while the Department of Justice investigated. But the DOJ decided not to pursue charges in July.

Monday's decision from the police commissioner comes just two weeks after an administrative judge within the department said Pantaleo should be fired.

After the announcement, Garner's daughter, Emerald, criticized the five-year delay, and said her family's fight isn't over.

"So Commissioner O'Neill, while we appreciate you making your decision, we are definitely still calling for Eric Garner law which will ban the chokehold and ban officers being protected by a shield and not held accountable for their actions," Emerald Garner said.

On the other hand, the head of the NYPD police union strongly criticized Pantaleo's firing.

"New York City police officers now will be considered reckless every time they put their hands on someone. That's what our job is," Pat Lynch, president of the New York City Police Benevolent Association said.

Pantaleo's attorney said they plan to appeal the commissioner's decision.