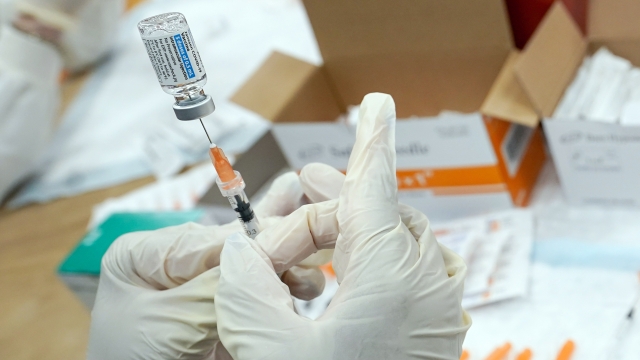 All private employers in New York City will have to require their workers to get vaccinated against COVID-19, the mayor announced Monday, imposing one of the most aggressive vaccine rules in the nation.

The move by Mayor Bill de Blasio comes as cases are climbing again in the U.S. and the worrisome Omicron variant is gaining a toehold in New York and elsewhere around the country.

"We in New York City have decided to use a preemptive strike to really do something bold to stop the further growth of COVID and the dangers it's causing to all of us," he said.

De Blasio, a Democrat with just weeks left in office as leader of the nation's largest city, said the mandate will take effect Dec. 27.

Speaking on MSNBC's "Morning Joe," he said the move is aimed at staving off a spike of infections amid holiday gatherings and as cold weather drives more people indoors, where the virus is more likely to spread.

Vaccine mandates across states and cities vary widely, with some states resisting any mandates and others requiring the shots for government employees or certain sectors that run a particularly high risk, such as health care workers.

But most officials have not announced mandates reaching as far into the private sector, nor mandates covering so many people.

President Joe Biden sought to impose a similar mandate nationally, applying to businesses with 100 or more workers, but federal courts have put that on hold ahead of a Jan. 4 deadline.

De Blasio said he expects his new mandate to survive any legal challenges. A spokesperson for the mayor said it will apply to roughly 184,000 businesses in the city, which has a population of 8.8 million.

Vaccinations are already required for hospital and nursing home workers and for city employees, including teachers, police officers and firefighters. A vaccination mandate for employees of private and religious schools was announced last week.

Also, the mayor announced that anyone 12 or older who wants to dine indoors at a restaurant, go to a gym or see a show will have to produce proof of receiving two shots of the vaccine, up from the current requirement of one dose. In addition, proof of at least one shot will be required of children ages 5 to 11, de Blasio said.

De Blasio, who leaves office at the end of the month and has indicated he may seek the nomination for governor of New York next year, has sought to portray himself as a national leader in the fight against COVID-19.

The mandate takes effect days before Democrat Eric Adams is due to be sworn into office. Evan Thies, a spokesman for Adams, said in a statement that the mayor-elect "will evaluate this mandate and other COVID strategies when he is in office and make determinations based on science, efficacy and the advice of health professionals."

"When you dangerously combine a far-left, lame duck politician, who is anti-business, one-dimensional, unaccountable, not bright and has a perpetual 'I always know best' attitude,' you get Bill de Blasio, the Worst Mayor in America," Zeldin said in a statement.