NYC Subway Study Shows Half Of DNA From Unknown Organisms 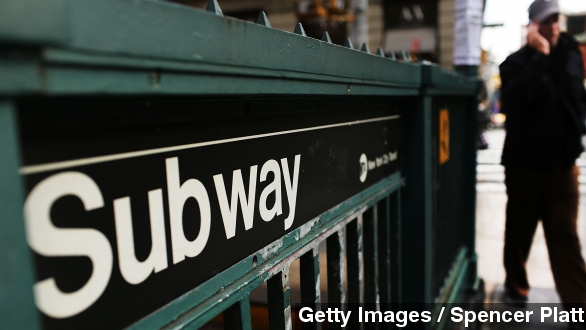 Germaphobes, you’ve been warned. Every fear you’ve probably ever conceived is in the subways of New York City.

But don’t worry too much — there are still a whole lot of things keeping you healthy are down there, too.

A mapping project from Cornell University researchers wanted to document both microorganisms and DNA recovered from everyday surfaces on a city-wide scale.

And what better place to get samples representing the full gamut of the population than the subway? The results? (Video via Discovery / "Build It Bigger")

“Nearly half of the DNA (48%) does not match any known organism.”

Researchers wrote that data “[underscores] the vast wealth of unknown species that are ubiquitous in urban areas.”

If you’re not sufficiently freaked out just yet, the lead researcher Chris Mason says traces of bubonic plague were found uptown.

And in the southern part of the city? Mason told The Wall Street Journal bacteria found there had only previously been seen in Antarctica. That likely has something to do with Superstorm Sandy in 2012 which slammed South Ferry Station. (Video via Metropolitan Transportation Authority)

Speaking of the astounding amount of dust and other DNA researchers found, Mason also told The Wall Street Journal, “Essentially, all of the rats or mice that you might see in the subway — as the train goes through, it kicks up the air and then it coats the entire subway system like snow of their DNA.”

Now, everybody just calm down. While the scary or gross microorganisms and DNA are going to make headlines, there’s also an astounding number of microbes essential for positive things like consuming waste.

“One of the most important notes of this entire research project is that we’re surrounded by hundreds of millions and trillions of bacteria, and yet most of us are just fine," Mason told The Wall Street Journal. "They’re just dust. They’re not this alien invasion force of evil bacteria.”

Researchers say they’re hopeful mapping systems can lead to major cities being able to tell how and whether diseases spread through the population, detect bioterror threats and maybe even how to predict areas people should avoid if there is an outbreak.

But so far, the city doesn’t seem overly pleased with Mason’s research — probably based on unwanted attention and an “ick” factor associated with city infrastructure.

The transportation authority stressed to The New York Times microbes were found at levels that posed no threat to human life, and the city’s health department called the research flawed and misleading.

Mason said not reporting the full findings would have been irresponsible and he “would rather confront our environment with knowledge rather than fear.” (Video via Metropolitan Transportation Authority)