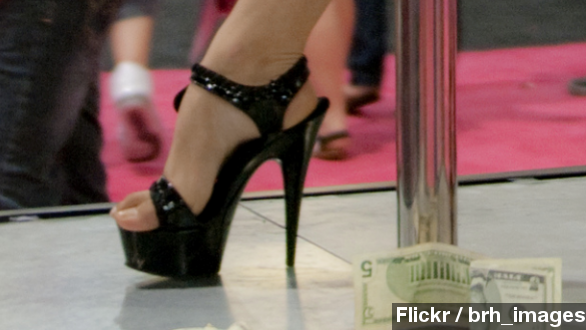 By Madison Burke
June 11, 2014
The four strippers and their manager are accused of finding wealthy men at local restaurants and giving them date rape drugs to extort money.
SHOW TRANSCRIPT

Some New York City strippers and their manager are accused of spiking wealthy men's drinks and then charging thousands of dollars to their credit cards at topless clubs.

"Prosecutors say the men were secretly given date rape drugs. Even an animal tranquilizer known as Ketamine." (Via  WABC)

The New York Daily News reports Special Narcotics Prosecutor Bridget Brennan said the scheme "involved not only the theft of $200,000, but compromised the health, safety and security of victims by covertly giving them harmful substances."

The four strippers and the manager in custody are facing charges of grand larceny, assault and forgery.

"Authorities tell us the plot ... allegedly involved the Scores Adult Entertainment Club on Manhattans' west side and the Roadhouse Gentleman's Sports Cabaret in Queens." (Via WNYW)

According to the New York Post, the men would wake up in hotel rooms with no memory of the night before. Then, when they would try to dispute the credit card charges, the strippers would threaten to embarrass them, often using photos they had taken while the men were drugged. (Via NY1)

But those threats could not keep everyone quite. Newsday reports one of the victims, Dr. Zyad Younan, has stated publicly the women tried to scam him out of $135,000.

The clubs where these events took place are not facing charges, although authorities have confirmed the women were employed there.