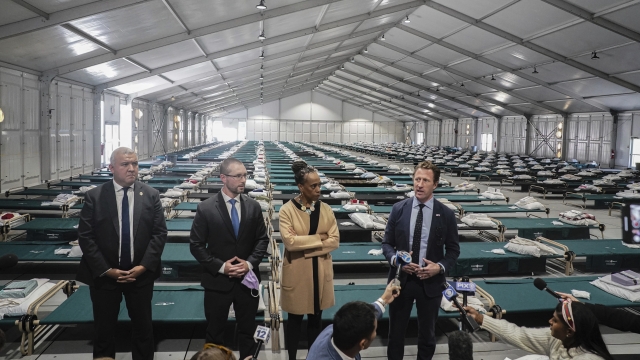 A complex of giant tents built on an island is set to open Wednesday as New York City's latest temporary shelter for an influx of international migrants being bused into the city by southern border states.

The humanitarian relief center on Randall's Island is intended to be a temporary waystation for single, adult men — many from Venezuela — who have been arriving several times per week on buses chartered predominantly from Texas.

Spartan and utilitarian, the tents include cots for up to 500 people, laundry facilities, a dining hall and phones for residents to make international calls.

The city's plan is to bring single men to the facility once they arrive at the main Manhattan bus terminal and to house them there for a period of days while determining next steps, officials said. Families with children are being housed in a hotel.

"We needed a different type of operation that gave us the time and space to welcome people, provide them a warm meal, shower, a place to sleep, to understand their medical needs, to really then work with them to figure out what their next step is going to be," said Emergency Management Commissioner Zach Iscol. 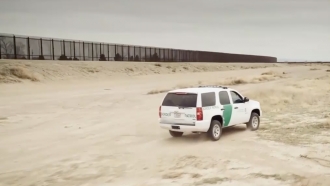 Why Are Governors Busing Migrants?

The white, plastic-walled tents also include a space where migrants can meet with case workers to determine their next steps, as well as a recreational room with televisions, video games and board games. They are heated, since overnight autumn temperatures can fall into the 40s and 30s. In the sleeping area, row upon row of green cots stretch out, each one with a pillow, some sheets and a blanket, and some towels. The city said it will be able to double the sleeping capacity of the tents, if needed.

In recent months, New York City has seen an unexpected increase in migrants seeking asylum in the United States who have been sent to the city from other states including Texas and Arizona. The influx has put a strain on the city's shelter system, leading officials to look for other places to house people and propose the temporary tent facilities.

New York City's homeless shelter system is now bursting with more than 63,300 residents. While there are fewer families in the shelters now than there were in the years before the pandemic, the number of single men has soared since the spring, largely because of the influx of migrants. There were more than 20,000 single adults in the shelter system Monday, up 23% from the nightly average in July.

Mayor Eric Adams declared a state of emergency earlier this month, calling the increased demand being put on the city "not sustainable."

The tents were initially planned for a far-off corner of the Bronx, but were moved after concerns about flooding and criticism from immigrant advocates over the remote location. Iscol said the Randall's Island location was safe from flooding.

Advocates remain concerned even with the new location, questioning what conditions migrants will be kept in, and whether the support they get will be adequate.

Randall's Island is located in the waters between the Bronx, Manhattan and Queens. Five bridges connect it to the three boroughs, and the city's subway system is a bus ride or walk away.

It's already put to a variety of uses — there are numerous athletic fields, as well as Icahn Stadium, a track and field facility. There's also a psychiatric hospital and a fire academy for the Fire Department of New York.