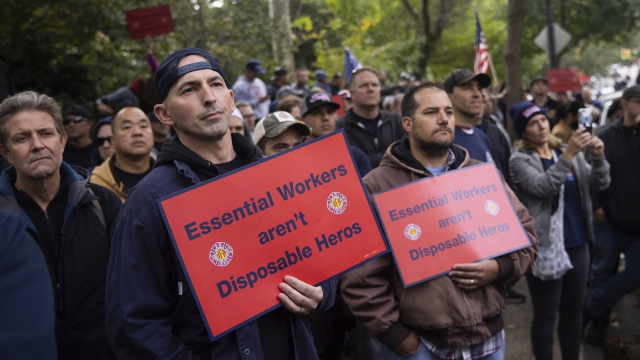 SMS
NYC Municipal Workers Face Friday Evening Deadline To Get Vaccinated
By Associated Press
By Associated Press
October 29, 2021
City workers who don't prove they've received at least one dose of a vaccine by 5 p.m. will be placed on unpaid leave Monday.

That's the possibility New York City is bracing for come Monday as a COVID-19 vaccine mandate looms and thousands of municipal workers remain unwilling to get the shots.

Police officers, firefighters, garbage collectors and most other city workers face a 5 p.m. Friday deadline to show proof they’ve gotten at least one dose of the COVID-19 vaccine.

Workers who don’t comply will be put on unpaid leave starting Monday.

Mayor Bill de Blasio held firm on the mandate as firefighters rallied Thursday outside his official residence, sanitation workers appeared to be skipping garbage pickups in protest and the city's largest police union went to an appeals court seeking a halt to the vaccine requirement.

The fire department said it was prepared to close up to 20% of its fire companies and have 20% fewer ambulances in service while changing schedules, canceling vacations and turning to outside EMS providers to make up for expected staffing shortages.

De Blasio said Thursday that the city has contingencies to maintain adequate staffing and public safety, including mandatory overtime and extra shifts — tools that he said were typically used “in times of challenging crisis.”

Police Commissioner Dermot Shea, who had COVID-19 in January, said his department was sending reminders to workers whose records indicated they hadn't yet received a shot and that NYPD vaccination sites will remain open all weekend.

More than 700 officers were vaccinated on Thursday alone, the NYPD said, rushing to meet the deadline for the mandate and an extra incentive: workers who get a shot by Friday will get $500.

Nearly one-quarter of city employees covered by the impending mandate have yet to receive at least one vaccine dose as of Thursday, including 26% of police personnel, 29% of firefighters and EMS workers and 33% of sanitation workers, according to city data. City jail guards have another month to comply.