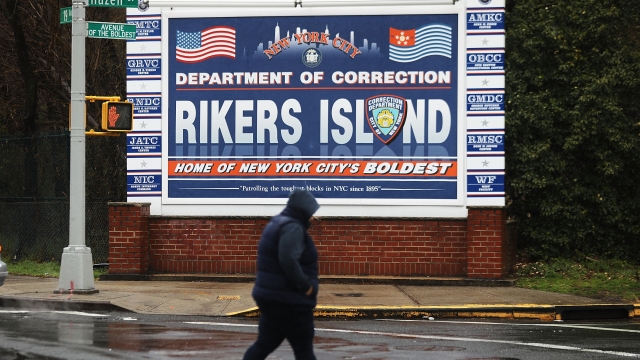 SMS
NYC Council Votes To Close Infamous Rikers Island Jail By 2026
By Jamal Andress
By Jamal Andress
October 17, 2019
For this plan to work, Mayor Bill de Blasio and the city of New York are counting on the city to continue its trend of steady of decarceration.
SHOW TRANSCRIPT

The New York City City Council has voted in favor of a plan to ultimately close the Rikers Island jail complex and build four new, borough-based jails by 2026. According to the mayor, this closing is part of a broader effort by the city of New York to continue its trend of decarceration.

The 87-year-old jail is infamous for its corruption, outdated facilities and violence. A 2017 court-mandated report called Rikers Island a "stain" on the city of New York and recommended the facility be closed.

The $8.7 billion plan to close Rikers and replace it with four new jails was backed by Mayor Bill de Blasio back in 2017.

But the effort to close Rikers started well before the mayor got involved. Darren Mack, of prison reform organization JustLeadershipUSA has been pushing to close Rikers Island for nearly 5 years.

"The condition is either you're a predator or prey … Not only did I witness a level of violence I've never seen before but in order to protect myself I had to exhibit that violence to keep people from you know, attacking me. I refuse to be prey so I became a predator," Darren Mack said.

Mack was incarcerated for 20 years, spending his teenage years at Rikers, before his release in 2012. He says Rikers was inhumane and corrupt during his time there and it's only gotten worse since.

"The correctional officers on Rikers is the biggest gang at Rikers. They will tell you that and they take on a gang mentality. They exhibit their power and control through violence. That's how they been operating since I was there in the early 90s up until the present day," Mack said.

While the mayor's plan has been approved, there's still quite a bit of work to do to make it a reality. Since 2013, the jail's average daily population has dropped from 11,000 prisoners to about 7,100, but this plan calls for further decarceration. The city needs to reduce the prison population to 3,300 prisoners by 2026, in order to fit them in the new facilities. That would be the lowest average jail population the city has seen since the 1920s.

Mayor Bill de Blasio and the city of New York are counting on several new programs to continue the trend of decarceration. For example, New York City will eliminate cash bail in 2020 and also expand the city's jail-to-jobs program.

The new jail facilities will be built in New York's four largest boroughs: Brooklyn, Manhattan, Queens, and the Bronx.

"It's definitely is a great victory, for all the work that activists and organizers been doing over the years and I think it's like a step closer towards justice for Khalif Browder and the people that we don't know about," Mack said.

Kalief Browder was 16 years old when he was charged with stealing a backpack in 2010. He ended up spending three years at Rikers Island without ever being convicted of a crime -- two of those years in solitary confinement.

In 2015, two years after Browder was released, he took his own life while struggling with depression. Many credit outrage over Browder's story with spurring public support for closing Rikers.