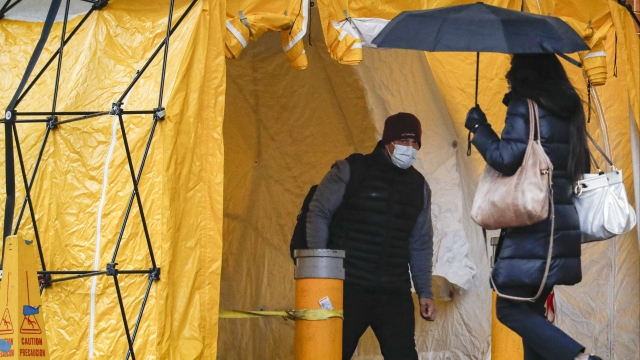 SMS
New York Is Ready For Army Corps To Build Temporary Hospitals
By Meg Hilling
By Meg Hilling
March 23, 2020
This comes as the state grapples with a growing number of cases and mounting strain on it's health care system.
SHOW TRANSCRIPT

Governor Andrew Cuomo made the announcement Sunday after touring the sites, saying he wants the Army Corps to begin "immediately." Locations include two convention centers and space at two universities.

The request comes as the state grapples with a growing number of coronavirus cases and mounting strain on its health care system. New York is recruiting recently retired health care professionals as reserve staff and continuing to call for assistance in securing medical supplies.

"If we don't get ventilators this week, we are going to start losing lives we could have saved. I can’t be blunter than that," New York City Mayor Bill de Blasio said Monday.

On Friday, President Trump approved freeing up to $42 billion in federal emergency funding for the state. On Sunday he announced he was activating National Guard units for New York, California and Washington to assist with setting up federal medical stations with thousands of beds.

According to Johns Hopkins University, the number of coronavirus cases in the U.S. has climbed above 35,000.