One NY Prison Escapee Missing, Another Killed By Police 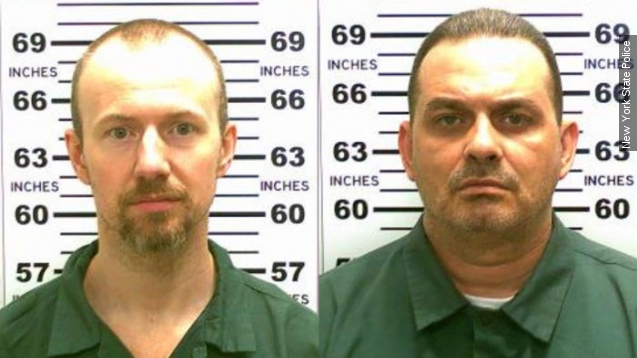 One of the convicted murderers who escaped from New York’s largest prison more than two weeks ago — Richard Matt — has been reportedly shot and killed by police.

There were initial reports that Sweat was cornered in the woods near Malone, New York but at a press conference Friday evening, Gov. Andrew Cuomo revealed authorities could not locate Sweat.

“There are several leads being tracked down as we speak about Mr. Sweat and his possible whereabouts but we don’t have anything to confirm where Mr. Sweat is at this time,” Cuomo said.

Authorities had been searching for Matt and Sweat near Malone after burglaries were reported in two hunting cabins in the area.

Matt was shot and killed by Border Patrol agents after he reportedly shot at a driver in a camper and the driver called 911.

Sweat and Matt led authorities on a 21-day manhunt after engineering a dramatic escape from their neighboring prison cells.

Two former prison workers have been arrested for aiding in Sweat and Matt’s escape.

Gene Palmer, who was a guard at the prison, admitted to providing tools to the prisoners and Joyce Mitchell said she put hacksaw blades and drill bits into a hunk of frozen hamburger meat to help Matt and Sweat with their escape.