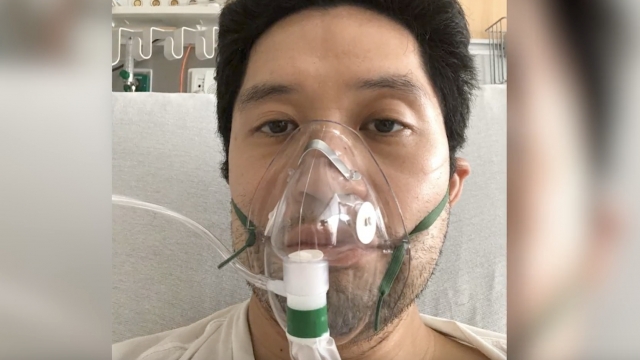 "My name is David Lat and I’m the founder and managing editor of above the law.com," David Lat said.

David Lat is fighting for his life in a New York City hospital — friends say he's in critical condition.

"He went from minor health issues to being sedated and on a ventilator very quickly," friend Katherine Rubino said.

Lat is only 44 and before this, was in good health. He ran the New York Marathon twice. A few weeks ago, he started feeling sick.

"He said he had labored breathing and he wasn’t feeling well, I think it was the 16th of March, and he went to the doctors and they sent him home," Rubino said.

Lat's been documenting his journey on Twitter, posting on March 17th:

"I've had 10 days and counting with no real improvement, of fever, fatigue, joint aches, chills, cough, respiratory difficulty. I have never been this sick in my entire life," Lat said. "This morning, this ex-marathoner could barely walk the five feet from the bed to the toilet — chest pains heaving with the labor of breathing. Today it took me 90 minutes to eat my lunch- because I kept getting winded. I'm so weak the fork wobbled each time I lifted it to my mouth."

David also tweeted about his frustration over the testing process which, in his case, didn't happen until after his second trip to the emergency room.

"He described it initially as Kafka-esque. The whole process of having to go from clearly having symptoms to actually be able to be tested," Rubino said.

David Lat is now part of a growing number of patients receiving an experimental drug combination which includes hydroxychloroquine, an anti-malaria drug that, despite caution from the medical community, is being touted by President Trump as a possible game changing therapy.

"We’re going to know soon. We’re ordering millions of units. It may work, it may not work. I feel good about it, just a feeling," President Trump said at a press briefing.

"It’s very experimental, no one’s really sure, doctors, according to the family doctors say they have to really take it day by day, hour by hour to see who’s responding well to the treatment…certainly our fingers are crossed that it will work out for David," Rubino said. Reporting for Newsy, I'm Ted Rowlands.