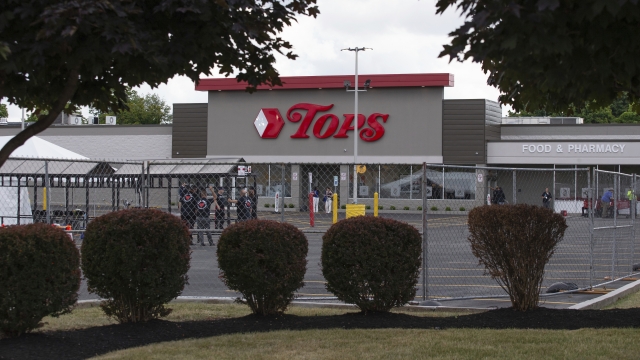 The recommendations are contained in a report examining the role of online platforms in the May 14 attack at a Tops Friendly Market.

Two top New York state officials on Tuesday called on lawmakers to outlaw the creation of videos of homicides, citing the viral spread across the internet of footage livestreamed by a gunman as he killed Black shoppers and workers during a racist mass shooting at a Buffalo supermarket.

Attorney General Letitia James and Gov. Kathy Hochul, both Democrats, recommended state legislation that would both criminalize graphic images or videos created by a killer and create "significant" civil penalties for online platforms that don't take "reasonable steps" to stop such recordings from being circulated.

The recommendations are contained in a report examining the role of online platforms in the May 14 attack at a Tops Friendly Market in which 10 people died.

The report by James' office found that the most widely-shared video of the shooting began rocketing around the Internet within minutes of being uploaded to an obscure file-sharing site by one person in Washington state, who then shared a link.

The gunman had talked about shooting up another store as well.

The link and video continued to spread for days, including on Twitter and other mainstream sites, despite efforts by some social media services to take them down. Nevertheless, the platforms cannot legally be held liable "given the present state of the law," the report concluded.

"There are no laws on the books that directly address the conduct at issue here, not even for the distribution of a graphic, uncensored video created by an attacker killing another person in cold blood," it said.

Payton Gendron, 19, is charged with killing 10 people and wounding three others in the mass shooting. He detailed his plans and White supremacist views in a private diary on the chat platform Discord, which he made public shortly before the attack began.

The shooter livestreamed the attack to the gaming platform Twitch, which is owned by Amazon. Twitch removed the video in less than two minutes. But a small number of the roughly 28 people who tuned in for part of his broadcast circulated recordings.

The video link posted by the Washington state resident was removed by a moderator of the site 4chan, an anonymous message board, after just 30 minutes, the report said. But by that time, other users had reposted the link about 75 times.

The 18-year-old gunman could face the death penalty.

"Shortly thereafter, the link began appearing on mainstream websites, including on Twitter within 17 minutes and on Reddit within an hour. In the following days, the link was posted and reposted on these and other sites thousands of times," the report said.

Hochul and James called for changes to the federal Communications Decency Act to require companies take reasonable steps to block violent criminal content, while acknowledging that platforms could potentially claim First Amendment and other protections.

"Extremist content is flourishing online, and we must all work together to confront this crisis and protect our children and communities," James said.

The shooter wrote in his online diary that he was inspired in part by violent videos and writings accessible across various platforms, especially by a video clip he saw on 4chan of the mass shooting at a mosque in Christchurch, New Zealand.

"By his own account, the Buffalo shooter's path towards becoming a White supremacist terrorist began with that clip," the report said.