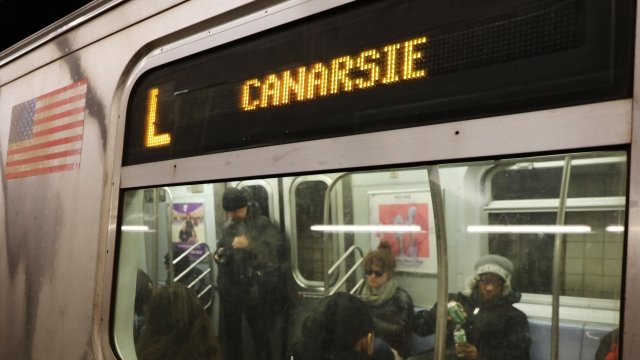 SMS
In Hail Mary Move, NY Governor Calls Off Massive L-Train Closure
By Caitlin Baldwin
By Caitlin Baldwin
January 4, 2019
The L train was supposed to be completely shut down for more than a year starting in April.
SHOW TRANSCRIPT

New York Gov. Andrew Cuomo is pumping the brakes on a yearslong plan to close the train line that connects Manhattan to Brooklyn.

The Metropolitan Transportation Authority had scheduled to close the hundred-year-old L line in April so workers could fix corrosion caused by Hurricane Sandy. The closure was expected to last for over a year and was referred to as the "L-mageddon" or "L-pocalypse." Multiple news outlets report some residents moved or quit their jobs to prepare for the massive disruption to their commutes.

As the AP points out, a closure to the L line would have affected nearly 250,000 New York commuters.

But on Thursday, just months before the scheduled shutdown, Gov. Cuomo called it off saying his panel of engineering experts devised a new plan that would keep the L train running with less disruption.

"A closure of 15 months was highly problematic. Necessity is the mother of invention. What these people have designed is the first of its kind in the United States of America," said Gov. Cuomo.

The new plan will use fiberglass wrapping to repair the damaged and crumbling benchwall that houses the train's power cables. Instead of replacing the old cables, engineers will be able to install new ones. Those repairs will be done on nights and weekends.