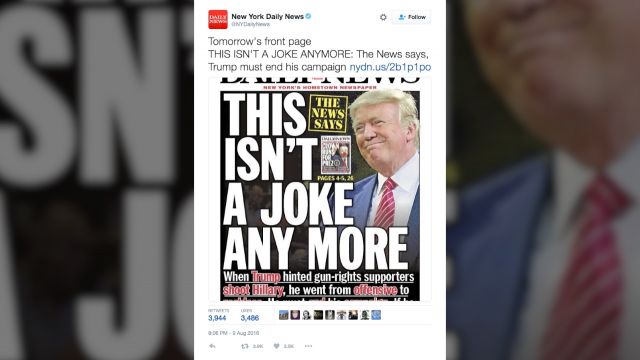 The outlet had some harsh words for Trump on Wednesday.

The Wednesday front page of the New York Daily News called for Donald Trump to end his presidential campaign.

This followed a Tuesday night editorial from the paper arguing one of the Republican nominee's latest comments hinted at promoting violence against Hillary Clinton.

At a rally in North Carolina on Tuesday, Trump said Clinton could abolish the Second Amendment through her potential picks for Supreme Court justices.

SEE MORE: Trump Says He'll Debate — But He Has To See The Conditions First

But the New York Daily News argues that comment both made light of murder and could put the idea in someone's head to carry out an assassination.

But Trump's senior communications adviser told CBS his client "was obviously talking about American voters who are passionate about their Second Amendment rights and advocating they use that power at the ballot box."

A former head of the CIA told CNN, "If someone else had said that outside the hall, he'd be in the back of a police wagon now with the Secret Service questioning him." He also argued politicians are responsible for what they say "and what people hear."

For its part, the Secret Service seemed to allude to being aware of Trump's comments.

Beyond interpretations of violence, some may have grievances with the factual side of Trump's comments. Clinton has never advocated for abolishing the Second Amendment, as the Republican candidate claimed.

Her stances have included expanding background checks and removing legal protections for gun manufacturers. But during the primary season, she claimed Bernie Sanders was too lenient on gun measures.