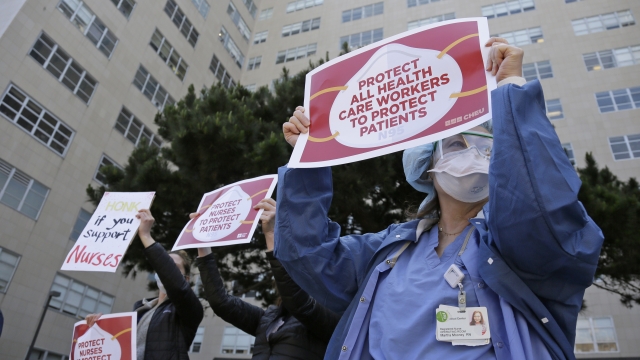 SMS
Nurses Group Believes At Least 90,000 Health Workers Have Had COVID-19
By Ahmed Jawadi
By Ahmed Jawadi
May 6, 2020
​The International Council of Nurses estimates "at least 90,000 healthcare workers have been infected, and more than 260 nurses have died."
SHOW TRANSCRIPT

The number of health care workers infected with the coronavirus may be significantly higher than previously believed.

The International Council of Nurses said Wednesday it estimates "at least 90,000 health care workers have been infected" around the world based on data it collected from various countries. That number is more than four times higher than what the World Health Organization reported in early April. The ICN also said over 260 nurses have died from the virus, which is more than double what it reported last month.

"This isn't data for data sake; it's information and evidence that could drive and improve infection, prevention and control measures," Catton said. "And frankly, it can also help prevent possibly thousands more deaths of health care workers."