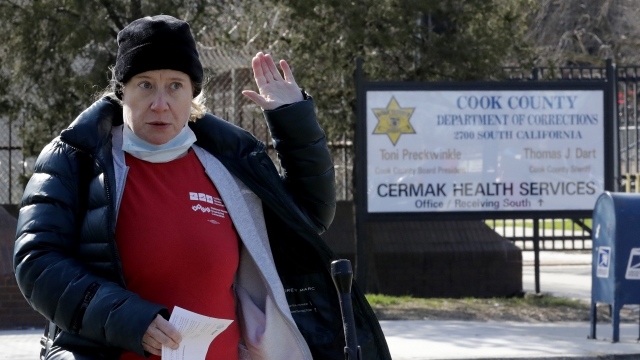 SMS
Chicago Nurses Call For More Cook Co. Jail Detainees To Be Released
By Jamal Andress
By Jamal Andress
April 20, 2020
So far, the jail has released more than 1,400 detainees bringing the total population to less than 4,300.
SHOW TRANSCRIPT

Elizabeth Lalasz is one of several nurses in Chicago battling the coronavirus outbreak. But Lalasz works with one of the city's most vulnerable populations — detainees at Cook County Jail.

LALASZ: "This is as bad as I've ever seen it. … I've been a nurse for about a decade now and I've never experienced anything like this. … emotionally physically, psychologically just draining."

The jail, one of the largest in the country, is experiencing a relentless outbreak inside its facilities. Between detainees and staff, there are 440 positive cases of coronavirus connected to the jail — the worst of which end up at Stroger Hospital. Four detainees who tested positive for COVID-19 have died.

LALASZ: "I'm a nurse. We take care of people. And my normal routine at Stroger is I'm in the patient's room a lot, right? And you go in and you develop that relationship, you know, which is part of what it means to be a nurse, right? So they're alone a lot. They're scared. I mean, they're very sick."

Like many advocates, Lalasz is calling for the release of more detainees at Cook County Jail. Her union, National Nurses United, staged a protest outside the facility to push for more inmates to be released, better conditions at the jail and more personal protective equipment.

LALASZ: "I mean, it's always been overcrowded. As long as it's been around for the hundred plus years. … People are just going to die in massive numbers."

Alexa Van Brunt from Northwestern University and the MacArthur Justice Center filed a federal lawsuit against the Cook County Sheriff's Office calling for the release of "medically vulnerable” inmates and for better conditions inside the facility.

VAN BRUNT: "So we knew in particular from past campaigns that the Cook County Jail was really just going to be a sitting duck for the transmission of this disease."

A federal judge ruled against the release of these detainees but also gave the sheriff's office strict sanitation and quarantine guidelines to follow.

VAN BRUNT: "There had to be adequate soap and sanitation, a pretty basic right, through all the divisions. There had to be adequate cleaning supplies. The jail had to stop using bullpens at intake where all the people are crowded together in a cell. Because that's just a recipe for disaster with this disease. … just really it was a temporary restraining order having to do with general conditions in the jail just to bring the jail up to the most basic requirements of cleanliness, testing and protection."

It's important to mention the jail has managed to decrease its inmate population over the course of the outbreak, releasing more than 1,400 detainees since early March.

Sheriff Tom Dart has maintained throughout this outbreak that he's been ahead of the curve in providing care, releasing detainees and providing necessary cleaning supplies.

Despite that, the Cook County jail is still suffering from a very serious outbreak, and the nurses providing care to that facility and its detainees are worried.

LALASZ: "Nurses have been calling our union and telling people they're having anxiety attacks on the way to work. I mean, people who work at Stroger are not, let's say, weak souls. … They should be released. You have to do that for public health. And that means not just for public health for them. They're human beings. You need to release them."