Nurse With Ebola Arrives In Maryland For Treatment 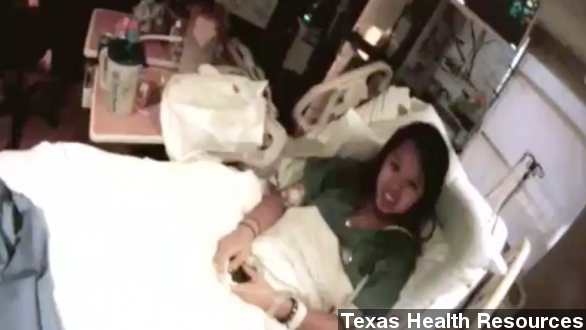 SMS
Nurse With Ebola Arrives In Maryland For Treatment

By Jay Strubberg
October 17, 2014
The first nurse in the U.S. to test positive for Ebola after caring for a Texas patient has arrived at a special treatment facility in Maryland.
SHOW TRANSCRIPT

The first nurse in the U.S. to test positive for Ebola after caring for a Texas patient has arrived at a special treatment facility in Maryland.

Twenty six-year-old Nina Pham, seen here prior to her departure from Texas, battled tears but appeared to be in good spirits.
NINA PHAM: "Come to Maryland, everybody! Party in Maryland!"

Pham will receive treatment inside the National Institute of Health's special isolation unit in Bethesda, Maryland — one of a handful of facilities in the U.S. equipped to handle Ebola cases. (Video via WBFF)

Pham is one of two nurses who became infected while treating the first Ebola patient in the U.S, Thomas Eric Duncan, who died at a Dallas hospital last week. A second nurse, Amber Vinson, was moved from Dallas to Emory University Hospital in Atlanta for treatment Wednesday.

Prior to receiving her Ebola diagnosis, Vinson had flown from Dallas to Cleveland, Ohio. CDC officials have received some flack for giving her clearance to make her return flight to Dallas Monday despite knowing she had an "elevated temperature" before boarding.

As an extra precaution, CNN says Frontier Airlines, the airliner she used, reached out to 800 passengers who either boarded Vinson's flights or flew on subsequent flights with that exact plane.

Still, the CDC reportedly says "there's an 'extremely low' risk" for anyone who was onboard her return flight from Cleveland to Dallas to have contracted Ebola. At any rate, in addition to the airline reaching out to travelers, the agency is contacting all 132 passengers on that return flight to check on their condition.