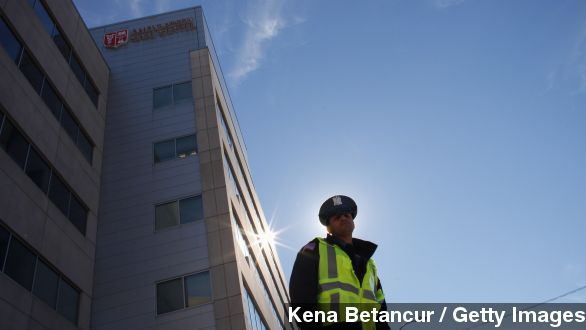 SMS
Nurse's Ebola Quarantine Leads To Lawsuit For Christie
By Ben Levin
By Ben Levin
October 27, 2014
A nurse who was quarantined after returning from Sierra Leone is speaking out over her treatment.
SHOW TRANSCRIPT

Nurse Kaci Hickox was released from quarantine on Monday, ending a four-day detention that focused the spotlight on New Jersey Governor Chris Christie, the rights of health care workers and the best way to protect the public from Ebola.

Hickox's detention meant she was confined to in an unheated tent, where she was forced to wear paper scrubs and talk with others through a screen. She had no fever, no symptoms and her Ebola test came back negative.

Governor Christie defended the policy last week, arguing it protects the public. “These actions that we are taking jointly today are I believe necessary to protect the public health of the people of New Jersey and New York.”

But Hickox was not happy to be the first health care worker forced into isolation. In an editorial for Dallas News, she wrote, "I am scared for those who will follow me." She also spoke to CNN.

Yet despite her outrage, the American public has been, at best, dismissive of Hickox's plight.

NBC: “So, we did ask the questions and as I mentioned you guys made a strong statement; 94% of you say there should be a mandatory quarantine in the United States."

Some, including many on Twitter, are downright angry about her statements, and accuse Hickox of being irresponsible and selfish.

But there is at least one place where Hickox is finding some sympathy: the public health community.

DR. ANTHONY FAUCI VIA ABC: "First, protect the American public, but do so based on scientific data. ... As a scientist and as a health person, if I were asked I would not have recommended that."

Hundreds of medical workers have returned to the U.S. from West Africa since the outbreak began in March. So far, none of those workers have transmitted the disease to anyone else, and there's no evidence Hickox would have been the first.

But as concerns about an Ebola outbreak at home reach a fever pitch, politicians like Governor Christie will feel more and more pressure to detain medical workers — even when there's no evidence they're actually sick.

And with or without public support, Hickox's battle against general quarantines is far from over: her lawyers announced they'll be suing Governor Christie over the detainment.