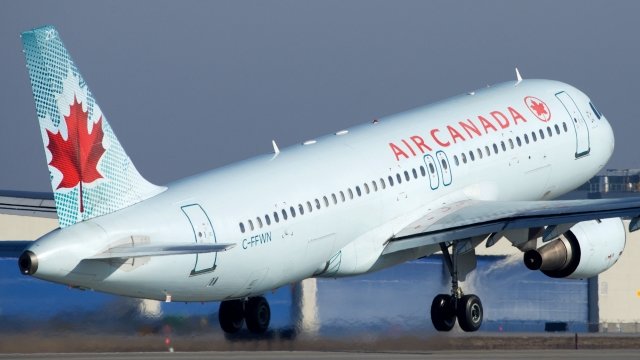 The National Transportation Safety Board has released new video of a near-miss at San Francisco International Airport last summer. It sheds more light on just how close several passenger planes got to colliding.

An Air Canada flight was landing at the airport, but the pilots lined the plane up on a taxiway instead of a parallel runway. There were four flights full of passengers sitting on the taxiway waiting to take off. Three of them were long-haul flights and would have each had hundreds of people on board.

It wasn't until after the Air Canada plane was over the taxiway — instead of the runway — that the pilots aborted the landing and pitched the plane up to gain altitude. But before the plane actually started ascending, it flew over one of the planes on the taxiway. That plane — a Philippine Airlines A340 — was somewhere between 55 and 58 feet tall. The Air Canada plane had a minimum altitude of 59 feet, right as it was passing over the Philippine Airlines jet.

The two runways that are predominantly used for landings in San Francisco are right next to each other. The night of the incident, the Air Canada flight had been cleared to land on the right-hand runway. The left runway was closed and its lights were off, except for a marker showing it was closed. It's possible that confused the pilots, though closed runways aren't uncommon.

Also, runways and taxiways have very different lighting configurations, and this incident happened on a clear night. The captain and first officer on the flight each had thousands of hours in the air.

Since the incident, the airport has changed its rules for night landings. It's decided that when a runway parallel to the one being used is closed, it won't allow visual landings. That means pilots won't be able to fly the plane by looking out the window. They'll have to set up the plane's computers to tell them where the runway is and fly by the instruments in their cockpit.