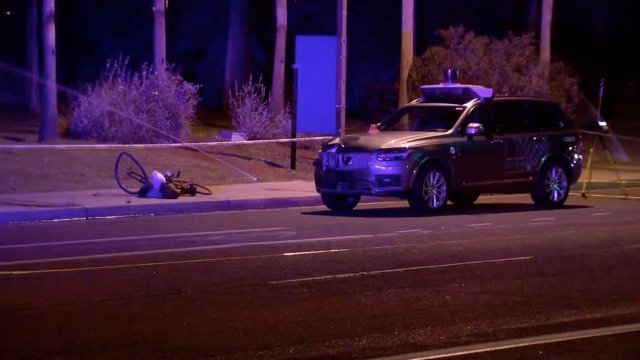 SMS
NTSB Releases Preliminary Report On Fatal Uber Crash In Arizona
By Briana Koeneman
By Briana Koeneman
May 24, 2018
The sensors on Uber's car reportedly spotted a pedestrian about six seconds before impact. But the vehicle's software got mixed up.
SHOW TRANSCRIPT

The National Transportation Safety Board has released its preliminary report on a fatal crash involving a pedestrian and one of Uber's self-driving cars in Arizona.

And it doesn't paint the company's autonomous vehicle technology in the best light.

According to the report, the sensors on Uber's car spotted the female pedestrian about six seconds before impact. But the vehicle's software got mixed up.

The report says, "The self-driving system software classified the pedestrian as an unknown object, as a vehicle, and then as a bicycle with varying expectations of future travel path."

The NTSB's report was released the day after Uber announced it's shutting down its self-driving car program in Arizona.