NTSB Investigating Boeing Flight That Slid Into A River In Florida 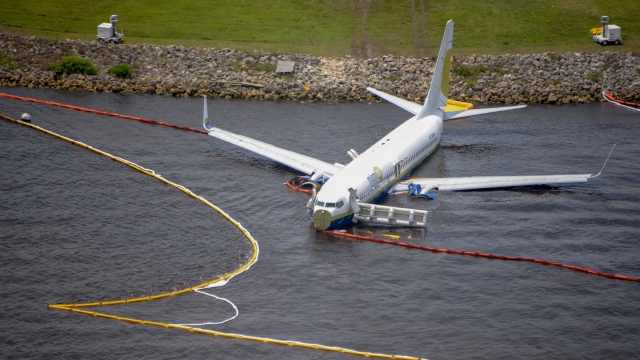 SMS
NTSB Investigating Boeing Flight That Slid Into A River In Florida
By Caitlin Baldwin
By Caitlin Baldwin
May 6, 2019
The plane took off from Guantanamo Bay and was headed to Florida's Naval Air Station Jacksonville.
SHOW TRANSCRIPT

The National Transportation Safety Board is investigating why the pilots of the Boeing 737-800 flight that slid into a river in Florida asked to switch runways last-minute.

NTSB officials say the plane was supposed to land on a runway to the west but that pilots instead requested to use the east runway. That runway was shortened from 9,000 feet to 7,800 feet to accommodate a barrier that's used for Navy aircraft training runs.

Investigators are also looking into why the the plane's left-hand thrust reverser wasn't working. Thrust reversers aren't always needed to stop a plane, but they can help it slow down in certain weather situations.

The plane, which took off from Guantanamo Bay and was headed to Florida's Naval Air Station Jacksonville, skidded off the runway into the St. Johns River during a thunderstorm Friday. Nearly two dozen of the 143 people on board were taken to the hospital.