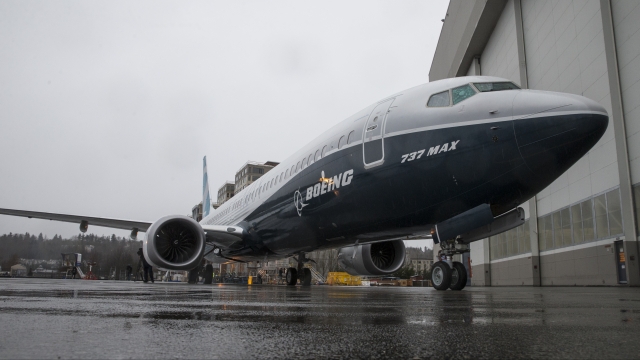 SMS
NTSB: Boeing Assumed Pilots Would Respond Quickly To 737 MAX Warnings
By Katherine Biek
By Katherine Biek
September 27, 2019
The NTSB looked into the safety evaluation process for a safety feature that may have contributed to two deadly crashes.
SHOW TRANSCRIPT

The National Transportation Safety Board says when Boeing was developing its 737 MAX aircraft, it overestimated how well pilots could respond if the flight controls were to malfunction.

The NTSB issued a series of safety recommendations to the FAA Thursday, after looking into the safety evaluation process for the aircraft's Maneuvering Characteristics Augmentation System, or MCAS.

Preliminary reports on the 2018 Lion Air crash and the Ethiopian Airlines crash in March suggest pilots of both planes might have had trouble with that safety feature.

The MCAS pulls the plane's nose down automatically if data says the nose's angle is too high. But if the angle-of-attack sensor transmits false data, then the MCAS would force the nose of the plane down anyway — leading to a nosedive.

As part of its investigation, the NTSB discovered both Boeing and the FAA didn't take variances of human behavior into account when they were designing and certifying the jets. Instead, the NTSB report says both worked off the assumption that pilots would be able to quickly identify the MCAS error and react properly. Additionally, it said Boeing and the FAA didn't consider how pilots would react if multiple alarms and alerts were all going off at once in the cockpit.

The NTSB now suggests the FAA consider how multiple cockpit alarms could impact a pilot's reaction during an emergency. The agency also says the FAA needs to create a standard process for validating any assumptions about a pilot's behavior.

Boeing's been working on an update for its MCAS software and hopes to get its grounded 737 MAX aircraft back in the air in the U.S. by the end of the year. But the FAA's administrator already said there's no timeline to recertify the jets.