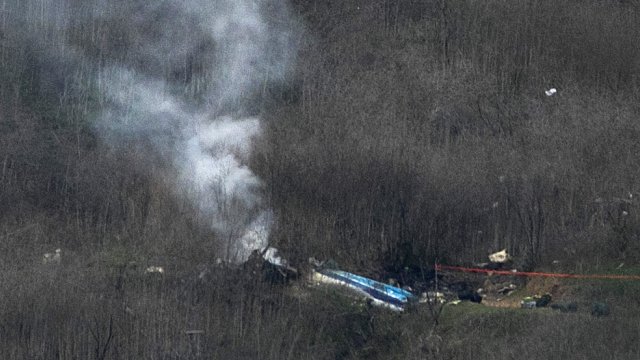 SMS
NTSB Details Minutes Leading Up To Kobe Bryant Helicopter Crash
By Briana Koeneman
By Briana Koeneman
January 28, 2020
According to the NTSB, one of the last things the pilot told air traffic control is that he was climbing to avoid a cloud layer.
SHOW TRANSCRIPT

The National Transportation Safety Board has shed some light on what happened in the minutes leading up to the helicopter crash that killed Kobe Bryant, his daughter and seven others.

During a press conference Monday, NTSB member Jennifer Homendy said one of the last things the pilot told air traffic control is that he was climbing to avoid a cloud layer.

Radar data indicates the helicopter climbed to 2,300 feet before it began a left descending turn. The last radar contact was around 9:45 a.m. local time. The wreckage was found at 1,085 feet.

Overcast skies and fog were reported at the scene of the accident. Both the Los Angeles Police Department and the county sheriff's department had grounded their helicopters because of the conditions. But Homendy said weather is just one of the factors the agency is looking into as it conducts its investigation.

"We take a broad look at everything in an investigation: man, machine and the environment. And weather is just a small portion of that," Homendy said.