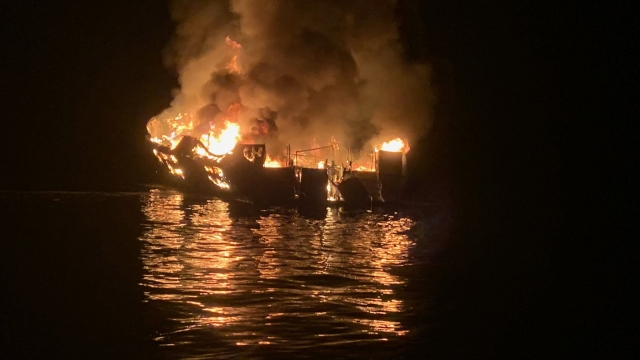 SMS
NTSB Report Says Crew Was Asleep When California Boat Fire Occurred
By Ahmed Jawadi
By Ahmed Jawadi
September 12, 2019
​According to a preliminary report, all six crew members were asleep when the fire started.
SHOW TRANSCRIPT

A preliminary report from the National Transportation Safety Board says crew members on the boat that caught fire off the coast of California earlier this month were asleep when the fire broke out.

According to the report, five crew members, including the captain, were sleeping in their rooms on the uppermost sun deck and another was asleep in the lower deck when the fire started. The five people on the top deck survived the blaze, and the one who was in the lower deck died along with the 33 passengers.

Because the report is preliminary, the NTSB stressed that parts of it are "subject to change and may contain errors." Investigators are still looking in to what caused the fire, with some speculating that electronics being charged may have been behind it. Some of the crew members interviewed by the NTSB said there were no reported mechanical or electrical issues before the fire.

According to The Associated Press, federal investigators could potentially bring charges under the Seaman's Manslaughter Statute, which criminalizes a boat crew member's "misconduct, negligence or inattention" that results in deaths.