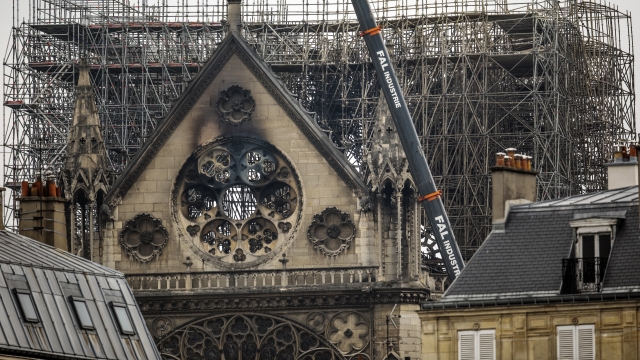 SMS
Notre Dame Cathedral Cleanup To Resume After Lead Concerns
By Antoinette Miller
By Antoinette Miller
August 5, 2019
Work on the Paris cathedral was paused after environmental groups voiced concern that the restoration will release dangerous lead into the air.
SHOW TRANSCRIPT

Cleanup and reconstruction efforts are set to resume later this month for the Notre Dame Cathedral in Paris. But, it will be done with caution after environmental organizations raised concerns over lead levels.

The cathedral was ravaged in an April fire. Hundreds of tons of metal melted, leaving massive amounts of lead and debris in the area. Environmental groups are worried the lead will be released into the air once reconstruction begins, putting workers and others in the area at risk.

A spokesperson for Notre Dame said health authorities tested the air around the cathedral after the fire and declared it safe.

Lead is a toxic metal that can cause developmental and health problems, especially in children. Adults can see long-term problems with high blood pressure and kidney damage after exposure to lead.

On Monday, a French environmental group demanded a shield be built over Notre Dame to reduce more lead from being released into the air. An official ruled out that idea, but said updated lead results will be released Tuesday. Health officials are encouraging children and pregnant women who live and work in the area to get their blood checked for lead.