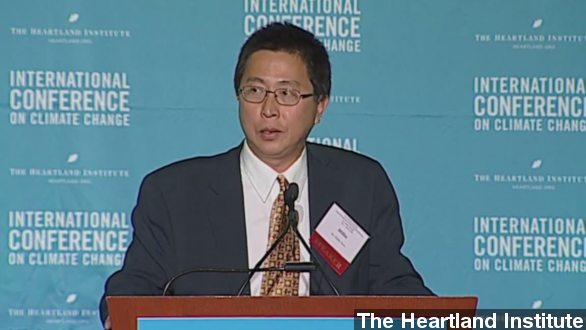 This is Wei-Hock Soon, a prominent climate-change skeptic, fielding questions from a Greenpeace member at a Heritage Foundation event in 2013. (Video via Greenpeace)

Now, records Greenpeace obtained through the Freedom of Information Act have revealed Soon, who works for the Harvard-Smithsonian Center for Astrophysics, took more than a million dollars in funding from sources with ties to fossil fuels.

The more than 100 pages of documents include emails between the Harvard-Smithsonian Center for Astrophysics and companies like Exxon Mobil and the Southern Company, as well as the Koch Foundation, among others.

Groups skeptical of climate change have lauded Soon's research; The Heartland Institute presented him with an award for courage and even called him a savior of the nation.

But Soon's connections to fossil fuel interests haven't always been disclosed, and, as The New York Times writes, that's problematic.

"At least 11 papers he has published since 2008 omitted such a disclosure, and in at least eight of those cases, he appears to have violated ethical guidelines of the journals that published his work."

The Times argued, like tobacco companies did starting in the 1960s, fossil fuel companies have tried to create the illusion of scientific doubt to protect their interests. (Video via Camel)

Soon's research has been cited by politicians in turn, who point to it as evidence that there is scientific doubt about the influence of human activities on climate change.

Oklahoma Sen. James Inhofe told CNN, "When you say the science is settled, and the overwhelming scientific analysis comes to that conclusion, frankly that is just not correct."

That's despite the fact that several studies have affirmed that more than 90 percent of climate scientists agree human activity is causing climate change, and a majority of international scientific groups agree as well.

And The Guardian says those scientific bodies, which include NASA and The National Science Foundation, provided grants for Soon's colleagues at the Harvard—Smithsonian Center for Astrophysics but never funded any of his work.