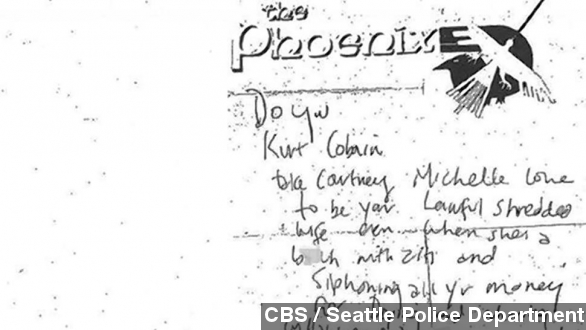 By Briana Koeneman
May 1, 2014
A recently released note found in Kurt Cobain's wallet after his 1994 suicide appears to mock his wedding vows to Courtney Love.
SHOW TRANSCRIPT

A little more than 20 years after Nirvana frontman Kurt Cobain's suicide, police have released an angry handwritten note found in his wallet — one that seems it would be a sting of pain for his widow, Courtney Love.

"In that note he writes, 'Do you, Kurt Cobain, take Courtney Michelle Love to be your lawful shredded wife.'" ​(Via Fox News)

CBS obtained a copy of what looks like a mock wedding vow from the Seattle Police Department. And it gets a lot worse.

The scrawled message in its entirety reads, "Do you Kurt Cobain take Courtney Michelle Love to be your lawful shredded wife even when [she's] a [expletive] with zits and siphoning all [your] money for doping and whoring." (Via CBS / Seattle Police Department)

Police say they found the note in Cobain's wallet after the grunge rock idol committed suicide in 1994. It was reportedly logged into evidence days later and never made public, until now. (Via Geffen Records / Nirvana)

And as a writer for Billboard points out, it sings a very different tune than Cobain's presumed suicide note, which called Love a "goddess of a wife who sweats ambition and empathy." She read portions of it aloud at a public vigil for him in 1994.

It's no secret that Cobain and Love's relationship was a stormy, tumultuous one that was often overpowered by drugs and wild fights. (Via YouTube / Courtney Love)

But as the Los Angeles Times notes, the two also wrote songs and spoke about their deep devotion and commitment to each other over the years.

Now, police haven't confirmed when the message was written or if the handwriting is Cobain's.

But as Mashable notes, the note was written on stationery from the Phoenix Hotel in San Francisco. The last time Nirvana played in the Bay Area was New Year's Eve 1993 — less than four months before Cobain was found dead from a self-inflicted gunshot wound.

The note was made public by CBS after the outlet got a hold of it via a public information request.

Police have also recently released new, grisly photographs of the scene of the Nirvana frontman's death. But despite the release of this new evidence, investigators say the case is still closed and is still ruled as a suicide.