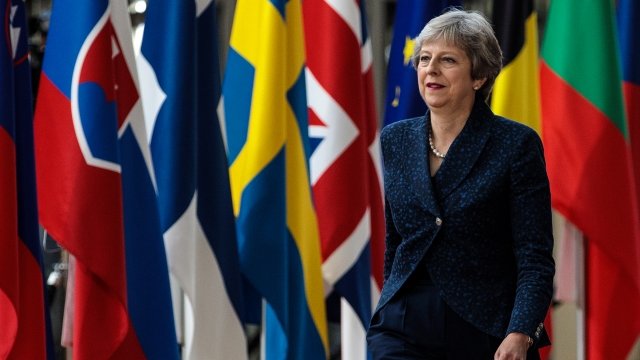 By Sebastián Martínez Valdivia
October 14, 2018
British Prime Minister Theresa May is contending with divisions within her own party and her allies in the Democratic Unionist Party.
SHOW TRANSCRIPT

While rumors of a potential breakthrough in Brexit talks between the U.K. and the EU swirled Sunday, negotiators were quick to dampen expectations.

After a meeting with his British counterpart, the EU's chief negotiator Michel Barnier tweeted, "Despite intense efforts, some key issues are still open."

The main issue is the border between Northern Ireland, which is part of the U.K., and the Republic of Ireland, which is in the EU. The two sides are trying to negotiate a "backstop" so that border can stay open even if negotiations drag on or fail to produce a deal.

The EU has rejected U.K. Prime Minister Theresa May's proposals, leading to divisions within her party and its Northern Irish ally, the Democratic Unionist Party.

EU leaders are scheduled to discuss the negotiations and any potential agreement at a summit in Brussels on Wednesday.