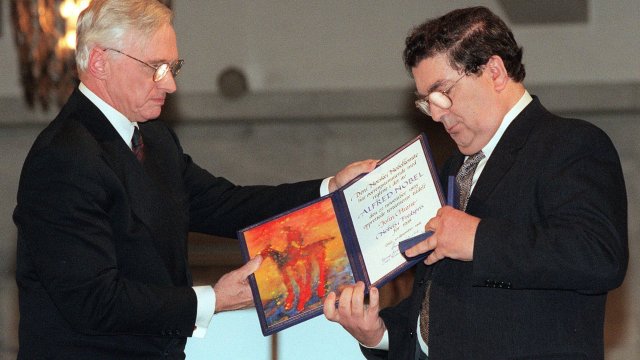 Nobel Peace Prize winner John Hume has died at the age of 83. The visionary politician is credited as the architect of the 1998 peace agreement in his native Northern Ireland.

According to his family, Hume died Monday morning after suffering from chronic health issues for several years.

While Hume advocated for a united Ireland, he believed that kind of change wasn't possible without the approval of Northern Ireland's Protestant majority. The advocate for nonviolence fought for equal rights and against injustice.

"It's only on the basis of equality, fairness and respect for our differences that we can begin to heal the deep divisions between our people," Hume said during the 1998 negotiations.

Hume's counterpart at the negotiating table reflected and gave him credit on Monday. Meetings between Hume and the former head of Sinn Fein, Gerry Adams, led to two Irish Republican Army cease fires in 1994 and 1997.

"We must have met in secret and privately for over a decade against the background and foreground of terrible atrocities and other events," said Gerry Adams, former Sinn Fein leader. "And at the end of it all, it worked. And it worked not least because of John Hume."