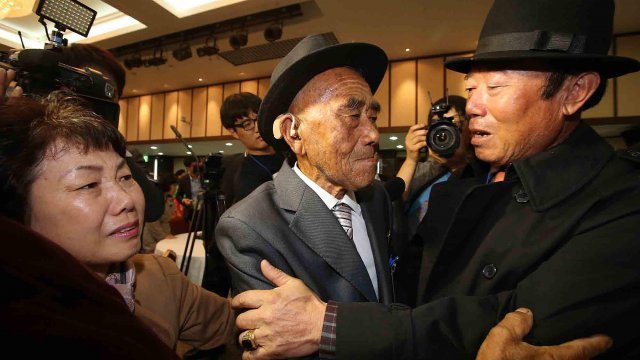 SMS
North, South Korea To Briefly Reunite Families Kept Apart For Decades
By Matt Picht
By Matt Picht
June 22, 2018
Families separated by the Korean War will get a chance to be briefly reunited in August.
SHOW TRANSCRIPT

For the first time since 2015, North and South Korea have set a date to briefly reunite families split up by the Korean War.

The two sides agreed to each send 100 people to meet at a North Korean tourist resort from Aug. 20-26. The Red Cross, which has branches in both countries, is facilitating this reunion, as it has for similar events in the past.

The reunions were first promised as part of the landmark April summit between North Korean leader Kim Jong-un and South Korean President Moon Jae-in. Their joint declaration initially scheduled reunions for Aug. 15 to coincide with celebrations of Korea's freedom from Japanese colonial rule.

The 1953 armistice that ended the Korean War left millions of people stranded on the opposite side of the Korean border from some of their family members. Travel and communication between the two countries was largely prohibited for decades, leaving those families with no way to keep in contact.

South Korea still has tens of thousands of people who are believed to have family members in North Korea. Most of them are in their 70s and up and may not have many more chances to reunite with their North Korean family members. 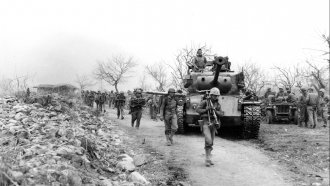 Family reunions have been an on-again, off-again feature of inter-Korean diplomacy since the practice first started in earnest in 2000. All told, over 21,000 Koreans have met in-person or via teleconference during the reunions.

The reunifications are the latest sign of increasing collaboration between North and South Korea: The two countries fielded a unified women's hockey team in South Korea during the Olympics and put on a joint music concert in North Korea months later.

But there are still plenty of issues that could get in the way of these latest reunifications — specifically, North Korea has said the South should repatriate a group of alleged defectors before the reunions go forward.