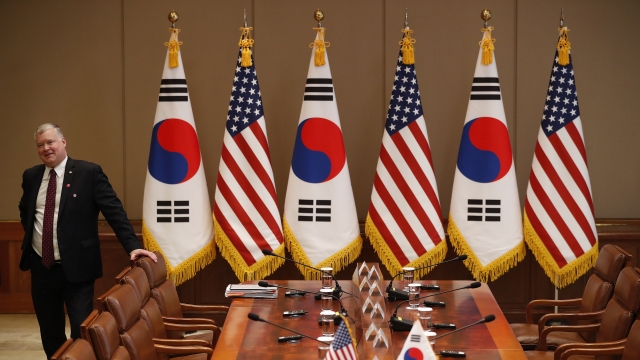 On Thursday, North Korea said it will not resume nuclear talks with the U.S. until Washington stops making what it calls "hostile military moves" in the region.

The warning comes as U.S. special envoy Stephen Biegun is visiting South Korea. He leads working-level talks with North Korea and arrived in Seoul on Wednesday.

Biegun expressed his eagerness to resume negotiations, saying Wednesday that the U.S. is "prepared to engage" as soon as North Korean officials are ready.

In a statement delivered by a state-run news outlet, a spokesman for North Korea's foreign ministry criticized the joint military exercise, condemning the presence of F-35A fighter jets and a mid-range cruise missile test by the U.S. The spokesman added that it could trigger a new Cold War on the peninsula.

"The United States and the South Korean authorities are reducing the dynamics of dialogue for building a lasting and durable peace ... this compels us to weigh a realistic way of turning our attention more to strengthening the physical deterrence."

North Korea, though, conducted another round of ballistic missile tests last Friday, despite U.N. resolutions banning any such action. Leader Kim Jong-un called the launches a "solemn warning" to the U.S. and South Korea ahead of those countries' annual war games, which North Korea considers a rehearsal for invasion.

Nuclear talks between the U.S. and North Korea have been stymied since the second summit between President Trump and Kim in February ended without an agreement.

The two leaders met again in June in the Demilitarized Zone. Earlier this month, President Trump said Kim told him he'd be ready to resume talks at the conclusion of the joint military exercise.

But according to the foreign ministry spokesman, "dialogue accompanied by military threats is of no interest to us."