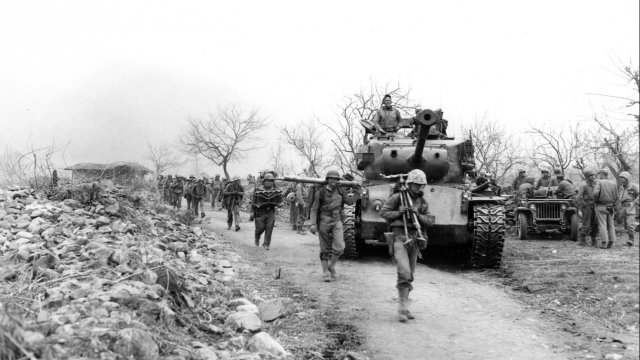 SMS
North Korea To Return Remains Of Up To 200 US Service Members
By Katherine Biek
By Katherine Biek
June 20, 2018
The decision to repatriate the remains of U.S. soldiers was announced at the summit in Singapore.
SHOW TRANSCRIPT

U.S. officials told multiple outlets that North Korea is expected to soon return as many as 200 sets of remains believed to be U.S. service members who fought in the Korean War.

Four members of the Trump administration told CNN that while those remains are expected to be handed over "in the coming days" it's not yet clear when and where that transfer will happen.

But once the U.S. does have possession of those remains, they'll reportedly be sent to a military lab in Hawaii where a DNA verification process will be conducted.

President Donald Trump and North Korean leader Kim Jong-un agreed earlier this month to recover the remains of prisoners of war and those missing in action from the Korean War.

According to data from the Department of Defense, about 7,700 U.S. military personnel are still unaccounted for from the Korean War. And the remains of an estimated 5,300 Americans are still in North Korea.