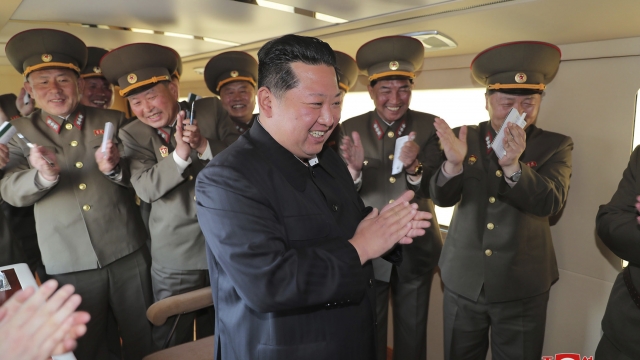 North Korea has test-fired a new type of tactical guided weapon designed to boost its nuclear fighting capability, state media reported Sunday, a day before its chief rivals the United States and South Korea begin annual drills that the North views as an invasion rehearsal.

The 13th weapons test this year came amid concerns that North Korea may soon conduct an even larger provocation. That may include a nuclear test in an effort to expand the country's arsenal and increase pressure on Washington and Seoul while denuclearization talks remain stalled.

KCNA said the weapon tested has "great significance in drastically improving the firepower of the front-line long-range artillery units, enhancing the efficiency in the operation of (North Korea's) tactical nukes and diversification of their firepower missions."

KCNA didn't elaborate, but its use of the words "tactical nukes" suggested the weapon is likely capable of carrying a nuclear warhead that could hit strategic targets in South Korea, including U.S. military installations. The KCNA dispatch didn't say when and where the launch occurred.

"North Korea is trying to deploy not only long-range nuclear missiles aimed at American cities but also tactical nuclear weapons to threaten Seoul and U.S. bases in Asia," said Leif-Eric Easley, a professor at Ewha University in Seoul.

"Pyongyang's purposes likely exceed deterrence and regime survival. Like Russia employs the fear it could use tactical nukes, North Korea may want such weapons for political coercion, battlefield escalation and limiting the willingness of other countries to intervene in a conflict," he said.

Some observers said the weapon showed in North Korean photos suggested it might be a smaller, lighter version of its nuclear-capable KN-23 missile that has a highly maneuverable flight aimed at defeating missile defense systems. Others said it could be a new missile that combines the technical characteristics of the KN-23 and another short-range ballistic missile called the KN-24.

South Korea's Joint Chiefs of Staff said in a statement that it had detected two launches from the North's eastern coastal town of Hamhung early Saturday evening.

It said the missiles flew about 68 miles at an altitude of 16 miles and a maximum speed of Mach 4. South Korea's presidential office said officials have met twice this weekend to discuss the North Korean military activities.

South Korea's military said later Sunday that its nine-day springtime drills with the United States will start on Monday. It said the allies decided to hold computer-simulated command post exercises that don't involve field training after reviewing factors like the COVID-19 pandemic and the allies' combined defense readiness.

The exercises could further intensify animosities on the Korean Peninsula because North Korea has previously responded with its own weapons tests and fiery rhetoric.

North Korea has started this year with a slew of weapons tests, including its first flight test of an intercontinental ballistic missile capable of reaching the U.S. homeland since 2017. South Korea recently said it has detected signs that North Korea is rebuilding tunnels at a nuclear testing ground it partially dismantled weeks before it entered now-dormant nuclear talks with the United States in 2018.

"North Korea has a domestic imperative to make and perfect weapons ordered by Kim Jong-un last year regardless of what the U.S. does or doesn't do. The test also tells his people that their country is strong despite their apparent economic difficulties," said Duyeon Kim, a senior analyst at Washington's Center for a New American Security. "One reason for the political timing could be to protest anticipated U.S.-South Korea military drills."

On Friday, Kim attended a massive civilian parade in Pyongyang that marked the milestone 110th birthday of his state-founding grandfather, Kim Il Sung. It appeared the country passed its most important national holiday without a highly anticipated military parade to showcase its new weapons systems.

Kim may still hold a military parade on the April 25 founding anniversary of North Korea's army. But if that anniversary goes without a military parade again, some experts say that might mean Kim doesn't have new powerful missiles to display and that his next provocative step will likely be a nuclear test.