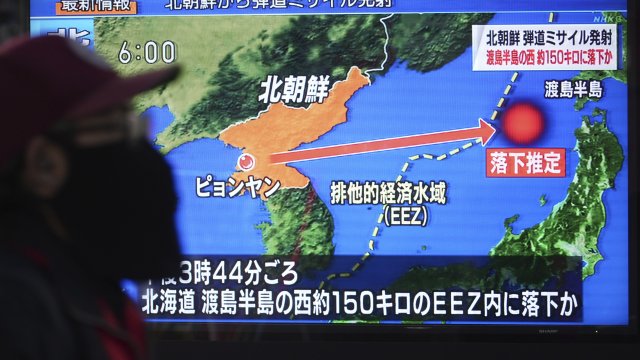 SMS
North Korea Tests Long-Range Missile, Escalating Nuclear Tensions
By Clayton Sandell
By Clayton Sandell
March 24, 2022
The missile launch is at least the eleventh one this year. It happened as President Joe Biden is in Europe to discuss Russia's invasion with allies.

The launch of a new intercontinental ballistic missile is now escalating nuclear tensions. For North Korea, it's bigger, and flew higher and longer than ever before.

"An ICBM test is definitely a big deal," said Dana Kim, Korea policy scholar at the Center for Strategic and International Studies.

The missile appears to be a Hwasong-17 — this one unarmed but capable of carrying a nuclear warhead. It flew about 3,800 miles nearly straight up, landing in the sea off the coast of Japan, but if that curve was flattened...

In response, South Korea fired a series of missiles of its own — a signal to Pyongyang it’s ready for any attack.

"I don't believe that that's true," Kim said. "Right now, there definitely still is a nuclear threat, and there will be as North Korea continues to develop nuclear weapons and weapons of mass destruction."

North Korea's launch — at least the eleventh this year — is timed as President Joe Biden is in Europe meeting with allies over Russia’s invasion of Ukraine.

"Kim Jong-un wants attention," Kim said. "That's what he's trying to signal. He's trying to send a message.... that diplomacy is not going to be easy moving forward, and that North Korea is making progress on its weapons of mass destruction. There's also a possibility that with the war happening in Ukraine, he's trying to draw the attention back to North Korea back to this side of the world."

The White House condemned the launch, calling it "a brazen violation of multiple UN security council resolutions" that "needlessly raises tensions and risks destabilizing the security situation in the region."

The U.S. and allies including France and Britain are calling for a UN security council meeting on Friday to discuss the launch and the next steps.