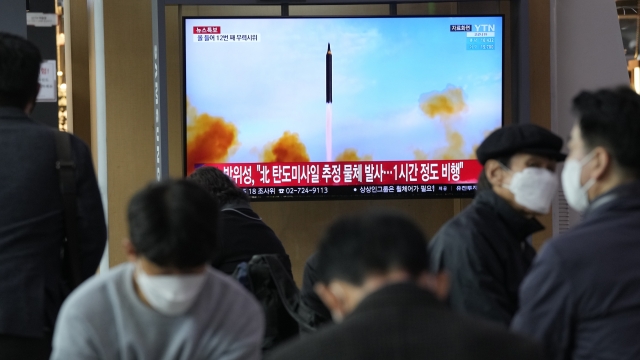 North Korea test-fired possibly its biggest intercontinental ballistic missile toward the sea Thursday, according to its neighbors, raising the ante in a pressure campaign aimed at forcing the United States and other rivals to accept it as a nuclear power and remove crippling sanctions. 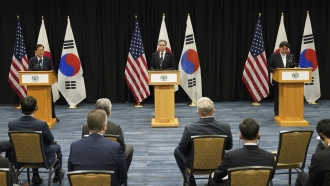 The launch, which extended North Korea’s barrage of weapons tests this year, came after the U.S. and South Korean militaries said the country was preparing a flight of a new large ICBM first unveiled in October 2020.

South Korea’s military responded with live-fire drills of its own missiles launched from land vehicles, aircraft and a ship, underscoring a revival of tensions as nuclear negotiations remain frozen. It said it confirmed readiness to execute precision strikes against North Korea’s missile launch points as well as command and support facilities.

South Korea’s Joint Chiefs of Staff said the North's ICBM fired from the Sunan area near capital Pyongyang traveled 670 miles and reached a maximum altitude of over 3,850 miles. The missile was apparently fired on high angle to avoid reaching the territorial waters of Japan.

The missile flew 71 minutes before possibly landing near Japanese territorial waters off the island of Hokkaido, said Tokyo’s Chief Cabinet Secretary Hirokazu Matsuno. Japan may search for debris inside its exclusive economic zone to analyze the North’s technology, he said. Japan’s coast guard issued a warning to vessels in nearby waters, but there were no immediate reports of damage to boats or aircraft.

Following a highly provocative streak in nuclear explosive and ICBM tests in 2017, Kim suspended such testing in 2018 ahead of his first meeting with then-U.S. President Donald Trump.

North Korea’s resumption of nuclear brinkmanship reflects a determination to cement its status as a nuclear power and wrest badly needed economic concessions from Washington and others from a position of strength, analysts say.

It was North Korea’s 12th round of weapons launches this year and came after it fired suspected artillery pieces into the sea on Sunday.