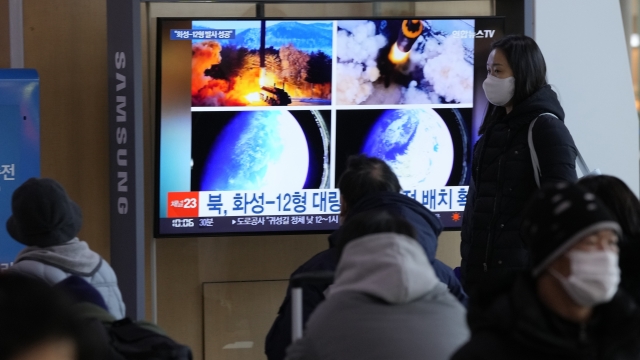 SMS
Expert: N. Korea Tested 7 Missiles To Get President Biden's Attention
By Sasha Ingber
By Sasha Ingber
January 31, 2022
The latest missile is the longest-range weapon the country has tested since 2017. It traveled about 500 miles on a near 30-minute flight.

State media announced the isolated country launched the Hwasong-12 on Sunday. The intermediate-range ballistic missile is capable of striking U.S. citizens and military bases in Guam, and it's the longest-range weapon North Korea has tested since 2017.

"Kim is trying to get the U.S.' attention," said Ken Gause, director of Adversary Analytics at CNA. "The Biden administration has been distracted with other foreign policy issues such as Ukraine, and it's also a very conventional administration that doesn't really want to be seen as rewarding bad behavior by engaging North Korea. So therefore, North Korea feels that it has to raise the stakes."

The seven tests in January have included short-range ballistic missiles and what Pyongyang claims are hypersonic glide vehicles, capable of evading U.S. defenses.

This latest missile traveled about 500 miles, on a near 30-minute flight, before landing in waters off Japan, according to South Korean and Japanese officials. North Korea says it was meant to verify the weapon system’s accuracy. Analysts believe both the 2017 and 2022 tests were conducted from the same location.

"We make it clear that we're condemning these attacks, and we continue to call on the North Korean regime to stop these provocations," said John Kirby, former Spokesperson for the U.S. Department of State.

Just days ago, North Korean leader Kim Jong Un threatened to end a moratorium on testing nuclear and intercontinental ballistic missiles, which he self-imposed back in 2018.

The Biden administration has been calling for negotiations with no pre-conditions.

"The door to diplomacy remains open and we have conveyed that clearly," White House Press Secretary Jen Psaki said.

China and Russia have proposed sanctions relief at the UN Security Council, and some analysts believe North Korea’s weapons testing could slow down by Thursday for the Winter Olympics in Beijing.