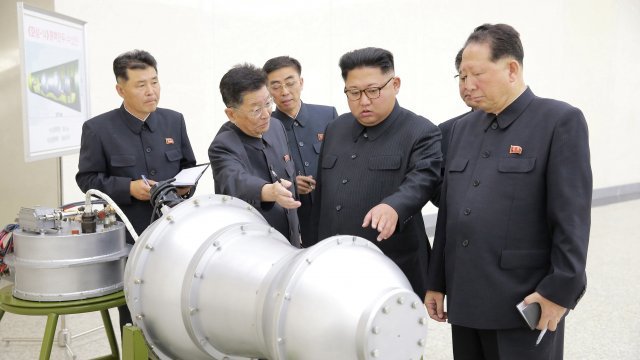 The test hasn't been independently verified.

North Korea says it successfully tested a hydrogen bomb designed to be mounted on an intercontinental ballistic missile.

The test hasn't been independently verified, but a senior U.S. official told NBC News that officials are "highly confident" that the test was of an advanced nuclear device.

North Korea claims the explosive power of the bomb can be adjusted between tens and hundreds of kilotons and that it can also be detonated at high altitudes. The test reportedly caused a 6.3 magnitude tremor.

This would be North Korea's first test of a nuclear weapon since President Donald Trump took office.

State-released photos show North Korea is developing solid-fuel missiles, which are harder to defend against.

On Twitter, President Trump called North Korea "a rogue nation which has become a great threat." He also called the country an "embarrassment" to China.

The nuclear test follows a series of other provocative moves out of North Korea. Last week, the country sent a missile over Japan as a precursor to its operation in the Pacific and its goal of "containing Guam."

South Korea held an emergency meeting after the nuclear test. CNN reports South Korea's chief security adviser said the country is considering deploying the "strongest US military assets" in a show of force against the North.