North Korea Says It's Not Interested In Further Talks With The U.S. 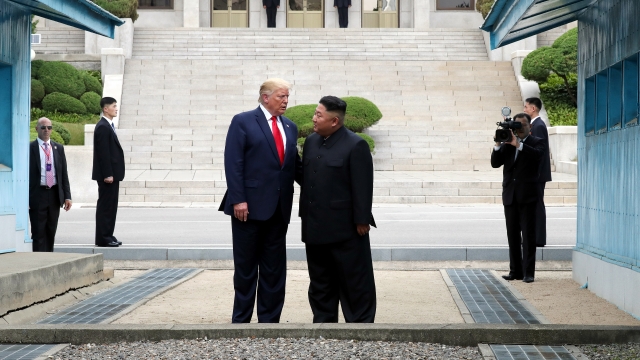 SMS
North Korea Says It's Not Interested In Further Talks With The U.S.

By Katherine Biek
November 19, 2019
President Donald Trump appeared to hint on Sunday that another summit with North Korean leader Kim Jong-un was in the works, tweeting, "See you soon!"
SHOW TRANSCRIPT

North Korea says it's not interested in holding more denuclearization talks with the U.S. unless it starts to get something in return.

President Donald Trump appeared to hint on Sunday that another summit with North Korean leader Kim Jong-un was in the works, tweeting "See you soon!"

But a North Korean Foreign Ministry adviser said President Trump's tweet was simply a stall tactic to "[pretend the U.S.] has made progress" on removing nuclear weapons from the Korean peninsula.

The adviser continued in his statement, saying, "As we have got nothing in return, we will no longer give the U.S. president anything to brag about."

Negotiations between the two countries have broken down quite a bit since President Trump and Kim's Vietnam summit earlier this year. It ultimately ended with the two leaders unable to agree on steps toward denuclearization and lifting U.S. sanctions.

As a "gesture of goodwill" towards Pyongyang, U.S. Defense Secretary Mark Esper recently announced the U.S. and South Korea were postponing joint military exercises planned for later this month. North Korea's never been a fan of the exercises, citing them as a reason it needs to have a nuclear arsenal.

But the postponement wasn't enough for North Korea's nuclear negotiator Kim Yong Chol. He demanded the exercises be canceled entirely.