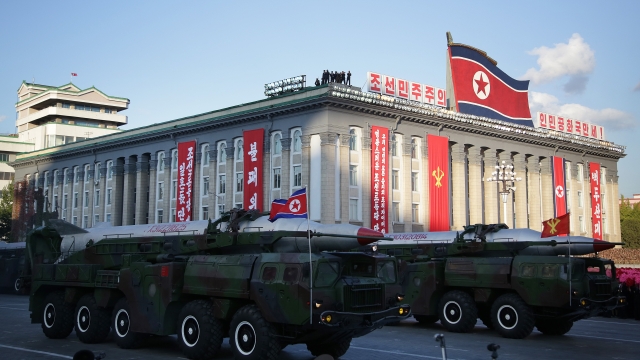 Analysts say the parade could reveal an intercontinental ballistic missile with multiple nuclear warheads that release in different directions.

North Korea is preparing for a military parade — to celebrate the 75th anniversary of the ruling Workers' Party. The event could debut the "new strategic weapon" Kim Jong Un warned about on January 1st.

"This is essentially like homecoming weekend or what they used to call Old Home Week back in the day," Michael Madden, a North Korea analyst with the Stimson Center and 38 North said.

Satellite images show newly erected tents and dozens of vehicles at training grounds, as well as people practicing in Kim Il Sung Square in Pyongyang. And then there’s what has yet to be seen.

"There's an opportunity that maybe a new missile system of some kind might come out," Madden said.

Analysts say the parade could reveal an intercontinental ballistic missile carrying multiple nuclear warheads that can be released in different directions -- known as a multiple independently targetable reentry vehicle. Whether it's real or a model will be debated, but experts say such an attack would be complicated to intercept on the continental United States.

Past parades have brought revelations that became serious threats. In 2010, North Korea showcased an intermediate-range ballistic missile called the Musudan, which puts Japan and U.S. bases in Guam in range. Another military parade introduced Kim to the world.

"In April 2012, Kim Jong Un surprised the world," Madden said. "When he went up to the podium in Kim Il Sung Square and was the first North Korean leader to deliver a speech."

But negotiations between the U.S. and North Korea have faltered.

"When I was at CIA, we called North Korea the hardest of the hard targets," Bruce Klingner, Senior Research Fellow at The Heritage Foundation said. "Things like the number of nuclear weapons or leadership health, leadership location, leadership intentions, those are very difficult to get information on."

Observers won't just be looking at weapons. They'll be studying who attends the parade, including a woman who could be Kim’s possible successor. His sister Kim Yo Jong.

"She was very well regarded by her father, Kim Jong Il, who, in meeting with foreigners, would rave about her intellect or her character, her decision making, even when she was younger," Klingner said.

"I think we're gonna be seeing a lot of masks, maybe parts of Kim Il Sung Square will be socially distanced," Madden said. "We might have to be asking ourselves, has everybody here been tested for COVID-19?"