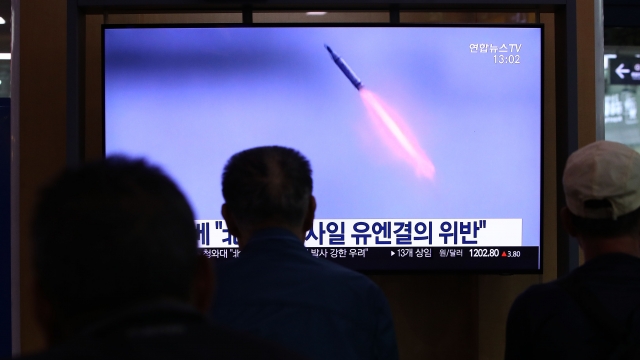 SMS
North Korea Launches Missile, Possibly From A Submarine
By Katherine Biek
By Katherine Biek
October 2, 2019
The missile reportedly flew about 280 miles and reached an altitude of 565 miles before it landed in the Sea of Japan.
SHOW TRANSCRIPT

North Korea launched a ballistic missile Wednesday, according to South Korea's Joint Chiefs of Staff. It's Pyongyang's 11th missile launch since May.

South Korea's military said the missile might have been test-fired from a submarine. The missile reportedly flew about 280 miles and reached an altitude of 565 miles before it landed in the Sea of Japan.

North Korea was developing a line of submarine-launched ballistic missiles before it suspended long-range missile tests in 2018.

An unnamed U.S. official told CNN that although Wednesday's missile looks like it was designed as a submarine-launched ballistic missile, it was likely launched from an underwater platform.

But no matter where it was launched from, analysts agree that North Korea conducted the missile test as a show of strength after it agreed to resume denuclearization talks with the U.S. North Korea's state news agency said those negotiations are set for Oct. 5.