North Dakota's Congressional Race Is A Symbolic One For Standing Rock 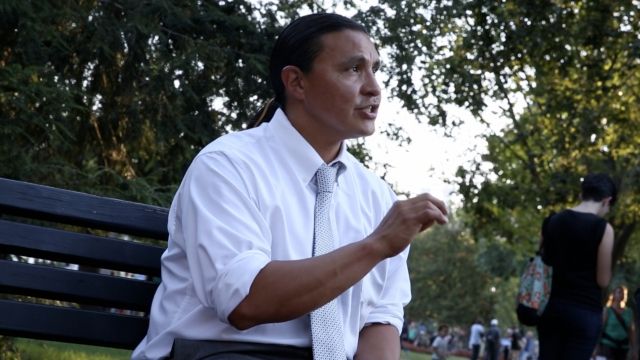 SMS
North Dakota's Congressional Race Is A Symbolic One For Standing Rock
By Kate Grumke
By Kate Grumke
October 31, 2016
The incumbent has sided with the company building the Dakota Access Pipeline, while his challenger is from Standing Rock.
SHOW TRANSCRIPT

North Dakota's congressional race is full of symbolism. The Democratic candidate, Chase Iron Eyes, is from Standing Rock, the reservation that started the movement opposing the Dakota Access Pipeline.

His opponent is incumbent Republican Rep. Kevin Cramer. Cramer is an energy adviser to Donald Trump and a climate change skeptic. He's also come out on the side of the pipeline company.

In 2016, a historic number of Native Americans ran for Congress, according to University of North Dakota professor Mark Trahant. At least nine candidates were running from five states and both parties. There were also a historic number running for state and local office.

Not all of them made it through their primaries, but Iron Eyes did. Newsy asked him why it's important to have Native Americans as representatives in Congress.

"We have a lot to learn from Tribal Nations," Iron Eyes said. "But we grew up in a reality, an educational and economic reality, that devalues those worldviews and paints them as primitive or uncivilized or less than. It's one of the reasons why I'm running for Congress — to add a voice that doesn't have to be educated or convinced to have compassion for Tribal Nations."