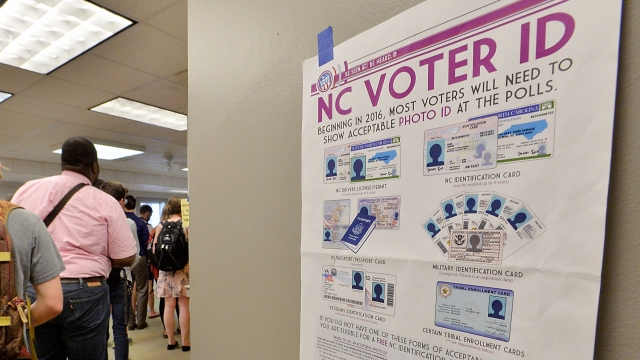 North Carolina isn't letting new court rulings stop it from making voting harder in the state this year. In July, an appeals court struck down the state's voter ID law and its cuts on early voting.

A court found North Carolina specifically gathered information on what avenues more minority voters use, and then eliminated those avenues or created other roadblocks. There's no hedging here — North Carolina's voting laws are racially discriminatory.

But the state is still trying to hang on to those laws. In an email, the head of North Carolina's GOP called on election boards to reduce voting hours and get rid of Sunday voting, moves which seem to target the same groups as the voter ID laws.

Gov. Pat McCrory also asked the Supreme Court for a stay on that July ruling because he believes it "creates confusion among voters and poll workers and it disregards our successful rollout of voter ID in the 2016 primary elections." He also called for seven fewer days of early voting.

A greater percentage of black voters cast their ballots outside of election day, compared to white voters. With Donald Trump polling at a paltry two percent among black voters, it benefits the GOP nominee if they vote less.

Not to mention McCrory himself is up for reelection this year. He's in a tight race with his Democratic challenger, and a Supreme Court stay would definitely help his odds of staying in office, since black voters historically lean left.

North Carolina will have to face the Supreme Court without its Attorney General, Roy Cooper, who just so happens to be McCrory's Democratic challenger. Cooper said he doesn't want to defend laws that are unconstitutional.

"The courts keep striking down these laws passed by the legislature and signed by the governor. When are they going to learn that you just can't run roughshod over the Constitution?" Cooper said to the media.