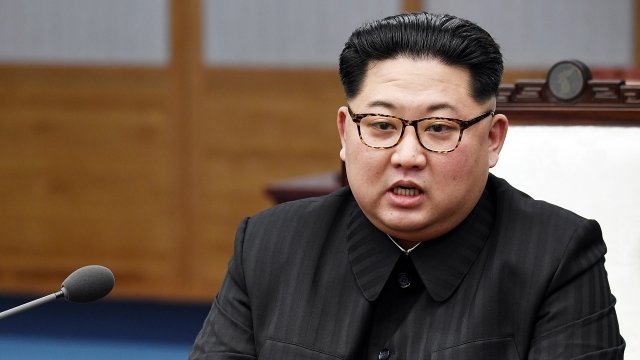 SMS
Denuclearizing North Korea Will Take A Lot More Than A Handshake
By Matt Picht
By Matt Picht
April 27, 2018
North Korea's Kim Jong-un has committed to a nuke-free Korean Peninsula, but there's a long road ahead to actually implementing that pledge.
SHOW TRANSCRIPT

It's official: After their first face-to-face meeting, North Korean leader Kim Jong-un and South Korean President Moon Jae-in both committed to a "common goal of ... a nuclear-free Korea peninsula."

But that's far easier said than done. North Korea views its nuclear program as a key deterrent to fend off any potential U.S. aggression. Kim's likely going to want to ensure that threat goes away before he really commits to denuclearization.

Catherine Killough, a fellow studying North Korea's nuclear program at the Ploughshares Fund, says: "They've always tried getting rid of their nuclear weapons with guaranteeing their security. What does that mean? How does the United States guarantee security for a little country like North Korea? 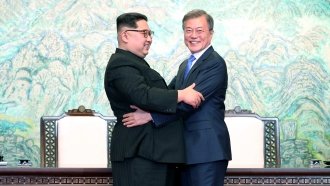 The Historic Inter-Korean Summit Was Loaded With Symbolism

"Some analysts worry that when North Korea says denuclearization of the Korean peninsula, they're talking about removing the U.S. nuclear umbrella, possibly U.S. troops from the region."

The U.S. has rejected similar proposals in the past as non-starters. But President Donald Trump's willingness to talk directly to Kim could at least help normalize relations between the two countries — which would be a start.

"This is something that was explored in the past during the agreed framework," Killough says. "What are the possibilities for opening a liason office in Pyongyang. That would be extremely meaningful for a country that has seen how the U.S. engages in regime change in other countries.

"If we look at North Korea's statements, public statements from 10 years ago to now, they've wanted to get to this point, where they can sit down with a U.S. president and be treated like a legitimate state.

"A lot of pundits don't like this idea of Kim Jong-un getting a seat at the big boys' table. But when we signed the armistice in 1953, in the armistice recommendations we were supposed to proactively figure out a way to resolve the crisis with an actual peace settlement. So it's on the U.S. to have North Korea at the table. The more that we withhold, the longer we're stuck with this bleak status quo.

"Peace is a process. It's not a privilege; it's not a product. We are in a better place now having adversaries meet face to face, shaking hands, than we were three months ago, four months ago."