North And South Korea Are Making Progress On Everything But Nukes 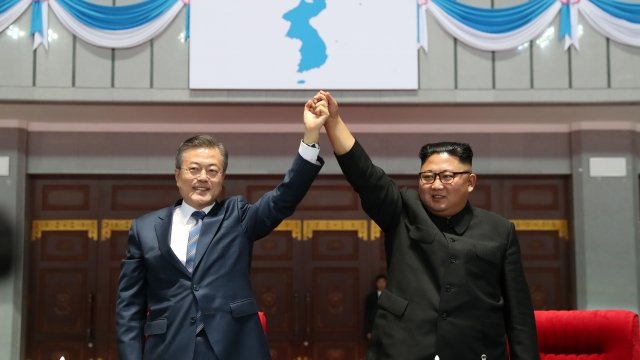 By Matt Picht
September 19, 2018
North and South Korea have agreed to work together on a number of issues — but not much has changed when it comes to denuclearization.
SHOW TRANSCRIPT

North and South Korea appear to be making real progress towards improving their war-torn relationship. But the goal of a denuclearized North Korea still seems as far away as ever.

During the inter-Korean summit in Pyongyang this week, North Korean leader Kim Jong-un put a new offer on the table: to shutter some facilities at the Yongbyon nuclear complex, one of the country's major sources of fuel for nuclear weapons.

But as with his previous offers of denuclearization, Kim wants the U.S. to make reciprocal gestures — actions like removing troops from the region or declaring a formal end to the Korean War.

The U.S. hasn't budged on those demands so far, which has led talks to a standstill. U.S. Secretary of State Mike Pompeo said Wednesday that he's ready to start up talks with North Korea immediately, in order to get the country to denuclearize by 2021.

Kim also firmed up a pledge he made to President Trump in Singapore: to close down the Sohae missile launch site, also known as Tongchang-ri.

Trump told reporters after the summit back in June, "You've got this missile engine testing site, we know where it is. ... I said, can you close it up? He's going to close it up." 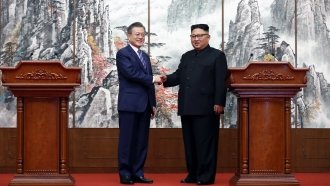 North Korea recently allowed international journalists to observe its destruction of the Punggye-ri nuclear testing facility, but barred experts from verifying that demolition.

The two Koreas are also moving forward on a host of non-nuclear issues. They've each agreed to pull back on guard posts and military drills from the heavily-fortified border dividing the two countries.

Moon and Kim pledged to cooperate on economic projects like an inter-Korean railroad, and the reopening of jointly-owned factories at the Kaesong complex, though international sanctions could complicate those efforts.

Moon will have an opportunity to sell Trump on his engagement deal when he attends the U.N. General Assembly meeting in New York on Monday. As for Kim, he's been angling for a second sit-down with Trump sometime in the near future.