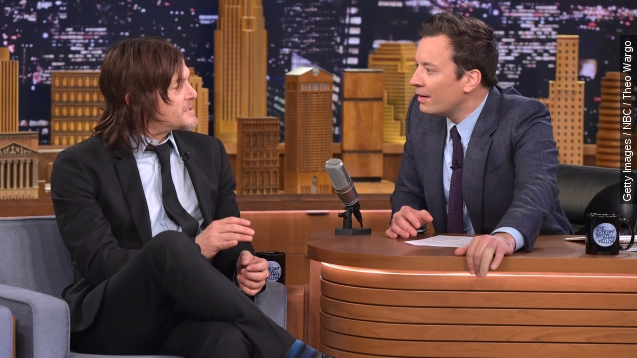 "The Walking Dead" star Norman Reedus talked to Jimmy Fallon Wednesday about how he got started in acting.

It all started with getting fired from his job at a motorcycle store.

That's according to Norman Reedus, who stopped by "The Tonight Show" Wednesday night and was asked how he launched his acting career.

"A friend of mine took me out to a party that night, and I drank way too much and started yelling at a bunch of people. And somebody approached me and asked me to be in a play," Reedus told host Jimmy Fallon.

Now don't get too excited: He was only cast as an understudy. But Reedus said he ended up going on opening night because the actor didn't show up.

Flash forward more than a decade, and Reedus is now starring as the big, bad zombie hunter Daryl Dixon on AMC's "The Walking Dead."

The show is so popular, 15.8 million people tuned in for its fifth season finale back in March. (Video via AMC / "The Walking Dead")

So while drunkenly yelling at people never seems like a sound decision, we'll let it slide this time.